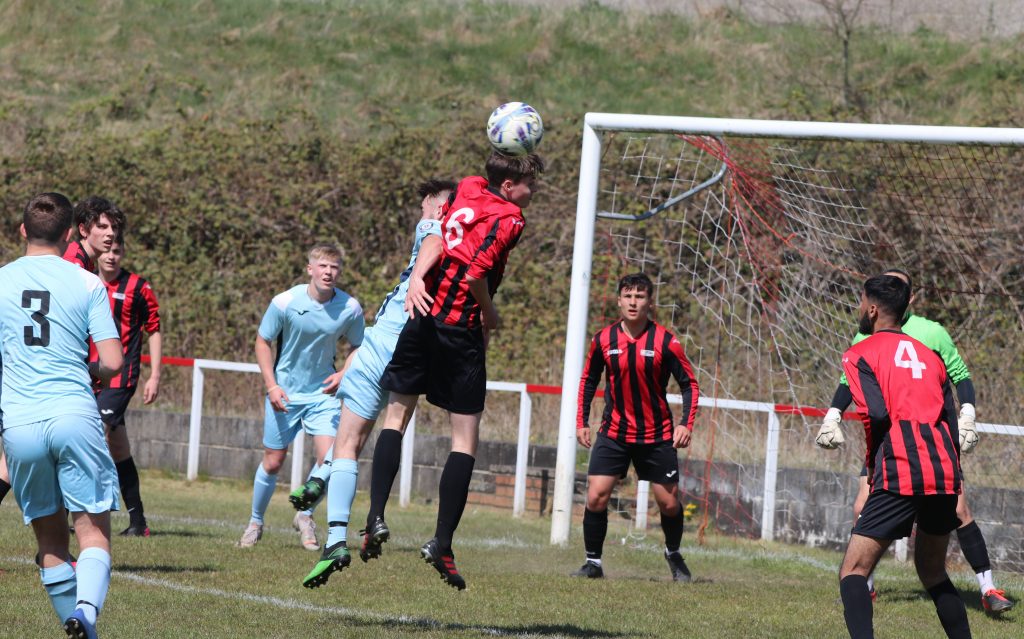 There were hat tricks for both Fin Barker and Brodie Carter as both Mickleover FC Academy sides faced each other at Borrowash.

Only three minutes into the game Carter was on the receiving of an early defensive error, to make it 1-0.

They had only just kicked off and it was close again, as Bobby Battisson picked his spot.

The pressure on the first years defence was relentless, and after eight minutes it was 2-0 when Barker was on the end of a positive build up.

But the first years kept plugging away themselves  and after 12 minutes Devon Smith had a shot just over Tom Smith’s bar. 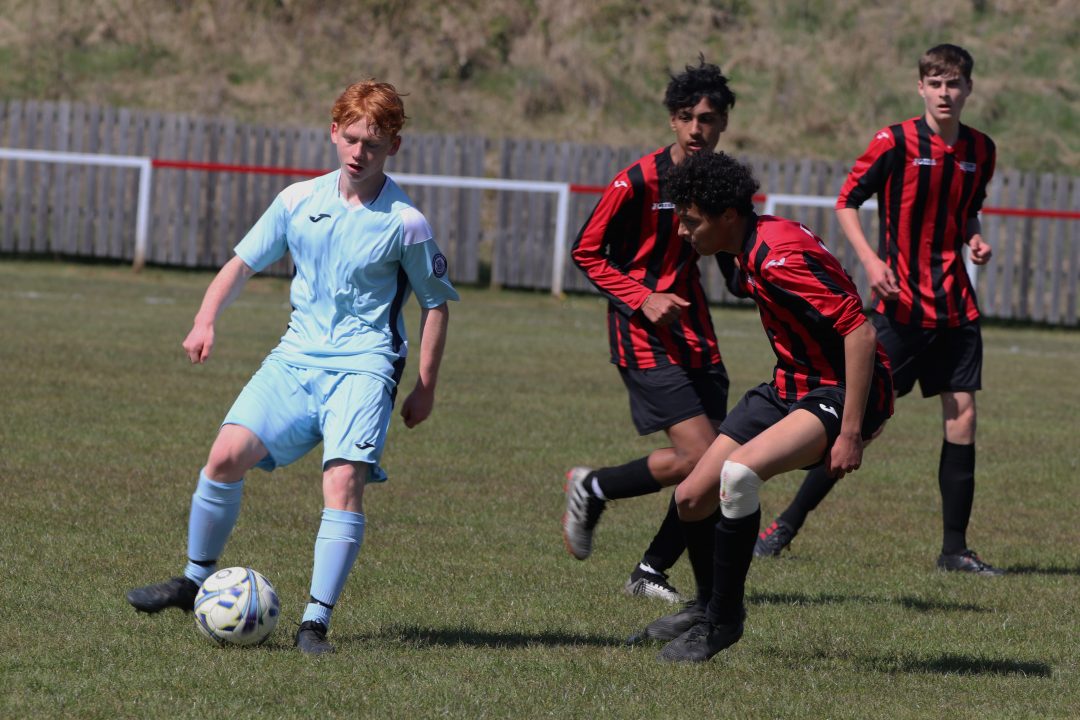 There was soon another goal though from the Seniors, when Barker outstripped Lewis Hughes and Ethan Mann in a sprint and made it 3-0.

Both Bernard Koecher and Lennon Higgins tried to push forward for the first years, and after 16 minutes Emilio D’Abreu had a good effort just over.

With Louis Pennington controlling midfield, he was able to pick out Jacob Edge-Lucas and George Atwal, as well as strikers Carter and Barker.

Barker had a shot straight at goalkeeper Bowen on the hour, before forcing him to intercept on the edge of his box only four minutes later.

D’Abreu and Smith worked well together when the ball got through to them, but Reece Perry, Dylan Sanghera and Joe Nzeyimana were all finding it tough.

After 40 minutes D’Abreu put Smith through, but Will Robinson easily intercepted.

The ball was soon back in Bowen’s goal mouth, and when the Seniors won a corner, Josh Satchwell, playing left wing back, rose high above the defence to head home for 4-0. To which coach Mills was heard to say, “we’ve only practiced that a 100 times.”

Barker managed to seal his hattrick before half time  to make it 5-0.But the Juniors could have had one too, with Smith on a telling run, only to find the whole of the Senior defence laying in wait. 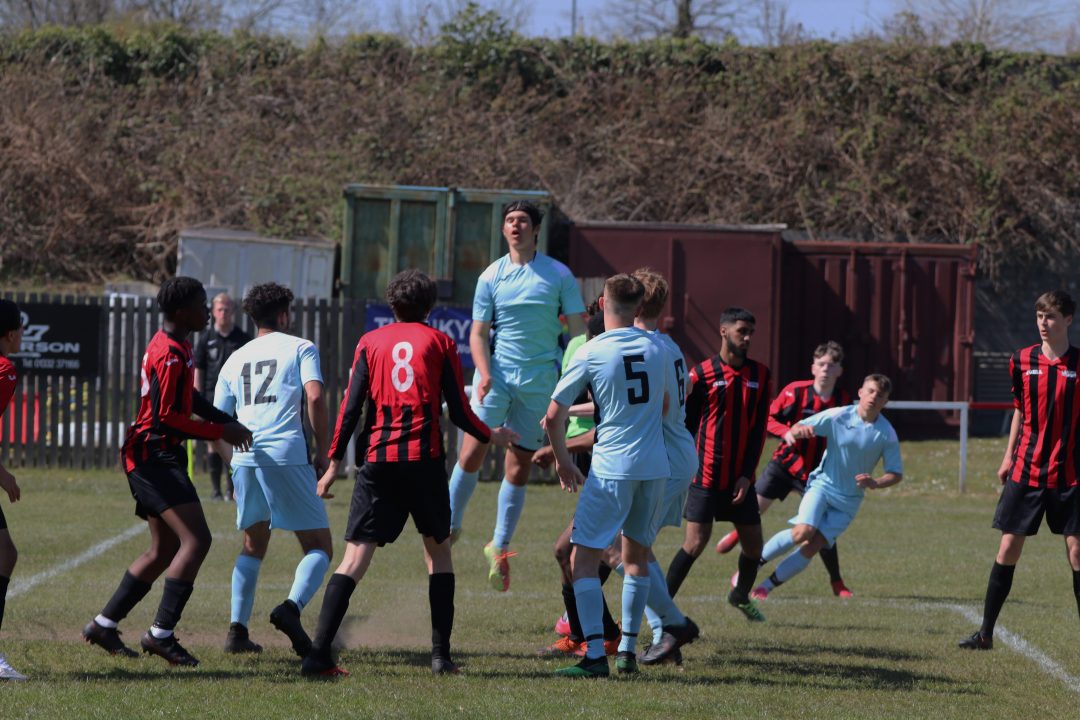 Both sides were starting to use their subs in the second half, but the Seniors were piling the pressure on again from the word go.

Nzeyimana had a half chance, but Smith shot out of his goal to end any hopes, but it was Bowen’s goal under more and more pressure.

Barker had a bustling run through on goal and earned a corner, but a mid-defence mix-up left Carter free for his second and it was 6-0 with 56 minutes gone.

D’Abreu and Smith both had cracks at goal when even a half chance occurred. But just after the hour the ball bobbed around various legs, before finding its way into Bowen’s net, 7-0. Edge-Lucas claimed it, “well I touched it at some point, so I will claim it,” he reckoned.

Apart from Cameron Anthony, most of the Seniors defence went on the attack, with Ben Lewin and Satchwell on the overlaps.

Carter had another chance after one of Lewin’s runs, before he hit his third and made it 8-0.

In the 75th minute came the 9th and final goal. Perry was chasing Sam Pipes towards the touchline and clipped the back of his heel. Pipes then made no mistake from the penalty spot to make it 9-0. 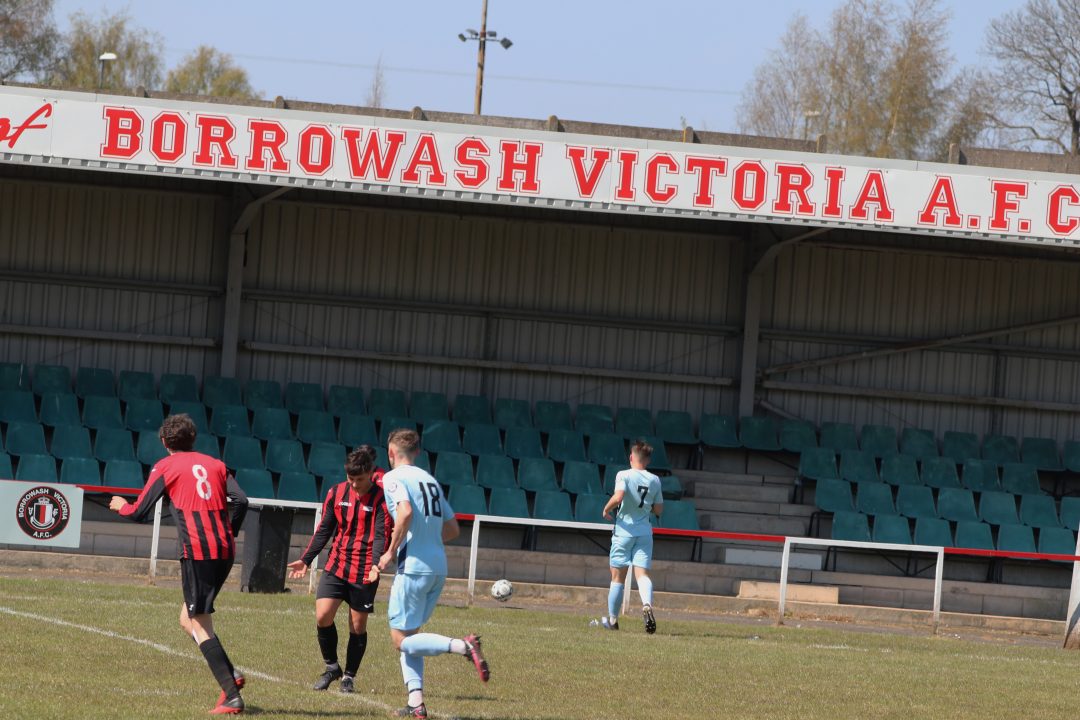 Kai Moore and Kyran Ward had come on and linked up with Satchwell, whose shot went over the bar, while with six minutes to Lewin had a try and forced Bowen into another diving save.

The strength and experience of the Senior players was the key factor, but the Juniors kept trying to the final whistle.

They play each other at Borrowash next Monday too, but before then the Seniors visit Rushall Olympic on Thursday.