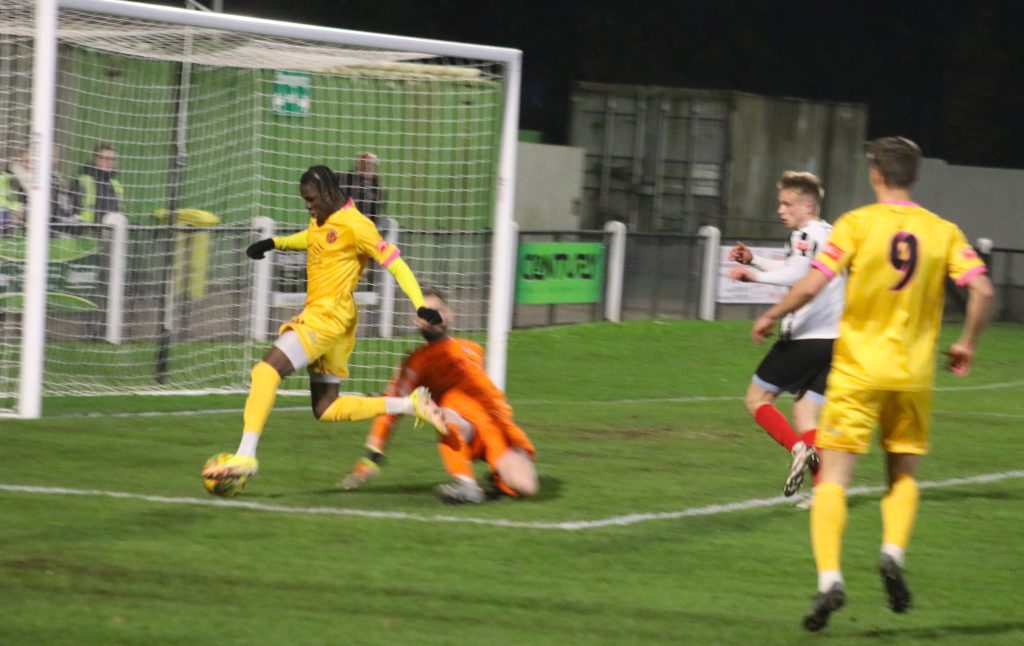 We always knew it would be a tough night at promotion seeking Coalville Town, but for almost an hour a point was certainly a possibility.

Mickleover made a late change to the starting 11 with Lekan Osideko making his first start in place of Stuart Beavon.

In the opening minutes it was fairly even, but Osideko looked quick, sharp and keen to impress.

Coalville’s Paul White was the first of the keepers to be tested, when Greaves fired a shot in from just outside the box. Sports seemed more fired up than the hosts and after a precise build up on the left between Dolan and Dales eight minutes in, Wilson fired in a curling shot. Initially White was going the wrong way, but managed to turn in the air to save, Osideko then put the rebound into the side netting.

Two minutes later Coalville had their first chance when Luke Shaw’s cross found Billy Kee. Hedge saved the shot and from the following corner, before the rebound shot was well wide.

There was another attempt from our hosts four minutes later, again high and wide, but overall it was still fairly even.

But 18 minutes in and Mickleover were so close to the opening goal, when Jake Eggleton completely missed his clearance, it fell to Osideko and his shot came back off the post.

As Coalville cleared their lines and Shaw made a break, outpaced the defence and found Chambers, who fired home against the run of play, 0-1.

Eliot Putnam then tried his luck for the hosts, but that was well over too.

There were appeals for a Mickleover penalty after 26 minutes. Dolan, Osideko and Dales had linked up well on the left and earned a corner. As Dales cut inside he was tripped just inside the penalty area, but the referee saw otherwise.

Wilson’s free kick was easily cleared, but three minutes later Osideko broke clear on the right, but he was on his own and his cross into the middle went to waste.

Rose but a great ball down the right for Yeomans to chase, but the defence just got their first and shortly after the half hour Reeves managed to meet a Wilson cross, but was unable to direct his header.

There was a bit of s scramble after a 36th Coalville free kick, but after that was cleared, Mickleover had one more chance before half time. After a long build up no one was having a crack at goal, then Dales tried to follow a Yeomans cross and was fouled.

Mickleover could count themselves as very unlucky to be a goal down as on the balance of play they had the upperhand over the 45 minutes.

Chitiza opened the second half with a header just wide for the hosts, before a strong run from Greaves sent Yeomans on a run, earning another corner.

Mickleover then finally got their break with Dales finding himself clear on the left. His curling shot had White beaten on his far post and it was in the top corner, 1-1.

For a while it was Sports in the ascendancy, with Yeomans on another run down the right, his cross beat the defence, but his team mates too.

But after 53 minutes the tide began to turn and the Mickleover defence starting to come under repeated attack from the hosts strike force.

There had been one goal mouth scramble cleared, but then Chambers fired in his second, after a one two with Chitiza. Hedge got to the shot, but couldn’t keep it out as it squeezed in by the near post, 1-2.

Kee put in a dangerous cross just missing Chambers and then Chitiza forced a double save from Hedge after 62 minutes.

Four minutes later and it was 1-3, when George Wilson went straight through the defence and slotted it past the advancing Hedge.

Apart from on occasional break giving Sports defence a brief respite, they were virtually torn apart by the hosts for the rest of the match.

Warren came on for Rose after 70 minutes, but Coalville were managing to get around the back of the defence with relative ease, before taking some random shots on goal.

Shaw had a couple of shots wide, but after 76 minutes Chambers was on for a hattrick, jinking his way through the defence, with no one making a tackle, only to put his final shot wide. Two minutes later though Kee made it 1-4, after Shaw set him up.

Mills came on for Reeves and with eight minutes left Osideko had a shot saved and earned a corner. It was a late flurry by Mickleover and when Dales found Osideko in the box, the striker had his back to goal and failed to make the turn for a shot.

Mann came on for Yeomans for the final minutes, but it was more bombardment from Coalville to the final whistle, with one almost clear goal attempt missed by the hosts.

So Mickleover remain fourth in the table still, but were well beaten on the night and now look forward to our visit to Hitchin Town on Saturday.