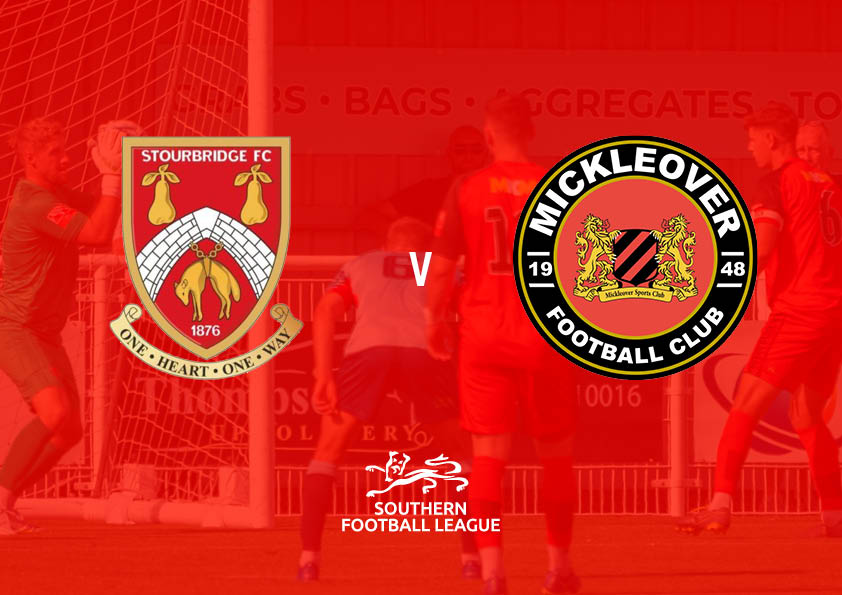 This Saturday we visit Stourbridge, who like Mickleover have had a fairly up and down season.

Sports have now gone without a win in the last five games and will be looking for maximum away points for the first time since October.

Andy Dales is still shaking off his groin strain and similarly Mitch Rose with his foot injury, but James Butler will be available again after his one match suspension.

Mickleover are currently ninth in the Southern League Premier Central table, with Stourbridge 11th, three points behind us, but with three games in hand.

In early November we fought out a 1-1 draw and since then the Glassboys have only lost two games, having beaten Royston 5-1 in their last home game and have made only one change in their line-up in the last four games.

Joint managers Leon Broadhurst and Stuart Pierpoint have been in charge since October 2021 and are both still registered to play.

Centre back Broadhurst is the clubs record appearance holder on 780, spending 10 years at the club before moving to Bromsgrove.

Pierpoint is also a centre back who has also played for Oldbury Utd, Sutton Coldfield, Halesowen, Stafford, Nuneaton, Solihull, Leamington and Brackley before a four-year stay at Stourbridge from July 2015. He was at Coalville before returning to our visitors.

Goalkeeper Charlie Price is in his second spell at the club, having left to join Alvechurch in June 2016, before returning three years later.

Striker Darryl Knights was a regular starter early in the season, but has been on the bench of late. A former Ipswich Junior he was capped by England at Under 16 and 17 and was loaned to Yeovil, before joining Kidderminster on his release.

Solihull was his next stop, then Newport and Solihull before returning to Kidderminster. After a spell at Tamworth, he had two years at Telford, before coming to Stourbridge in July 2020.

Full back Jack Wilson was another signing from Bromsgrove back in September 2021. He had made 200 appearances before his move and had a brief loan spell at Lichfield City too.

Jason Cowley is a striker who came from Bromsgrove too in July 2020. He started out at Redditch, before a first spell at Bromsgrove preceded a move to Stevenage. He was loaned to Solihull and on release had a month at Macclesfield, before rejoining Bromsgrove. He scored a hattrick in the recent 5-1win at Royston.

Midfielder Reece King arrived from Buxton in July 2020. He started his career at Malvern Town, before moving on to Gloucester City and Hednesford. After a spell at Leamington, he rejoined Hednesford, before going to Buxton in February 2020.

Joe Hull is another returnee having arrived for his second spell from Alvechurch in December 2020. He started out at Kidderminster, before moving to Redditch in 2010. Further moves took him to Hinckley Utd and Stourport Swifts, before returning to Redditch.

He first came to Stourbridge in February 2016 after just over three years at Halesowen. But after eight months and a loan at Tividale, he moved to Rushall Olympic, Bromsgrove and finally Alvechurch.

Right back Lee Vaughan was an academy player at Birmingham City and Portsmouth, before joining Chelmsley, from where he was spotted by Walsall.

He played over 45 first team games and was loaned to Willenhall, before joining Telford on his release. Moving on to Cheltenham, Tranmere and back to Kidderminster, he came to Stourbridge in July 2020 from Barnet, after a spell at Solihull and a return trip to Telford.

Midfielder Callum Gittings came from Leamington in pre-season. After starting at Alvechurch, he also played for Kidderminster, Solihull and Telford.

Former Walsall Academy midfielder Alex Moore joined Wolverhampton Casuals and Shifnal Town after his release, before stepping back up the ladder to Bromsgrove and Rushall Olympic. He had three years at Rushall before joining Stourbridge pre-season.

Midfielder Harry Lewis made his first team debut last season, after coming through the clubs academy. He has also had a few games for Team Dudley and has made a few starts this season.

Rackeem Reid is a striker that came from Rushall pre-season. He initially played for Chasetown and Paget Rangers before going to Nottingham University. He moved on to Belper Town and Long Eaton, before joining Quorn for 2019/20.

Centre Back Chris Knight is in his third spell at Stourbridge. He first joined them in July 2012 from Dudley, moved onto Lye Town but returned in July 2017. After going back to Lye and latterly Wulfrunians, he signed for our hosts again in pre-season.

Reece Stryche is both an England C and current Gibralatarian International, having scored three goals in 27 games for the latter.

He came from Hednesford in September in 2020, having played for a huge raft of clubs in his 14 year career, including Buxton, Alfreton, Darlington, Macclesfield and Wycombe, having started out at Hednesford.

Defender Alex Worley is an ex Walsall Junior, who was at Haverfordwest last season. He was another pre-season signing but is struggling to make the starting line-up so far.

Originally a right back, Tyler Lyttle arrived at Stourbridge in November. The former Wolves and Bristol Rovers Junior is the son of ex Forest defender Des and has scored four goals in the last three games.

He made three first team starts at Bristol and was loaned to Nuneaton and Truro, before joining Hednesford on his release. He was at Sutton Coldfield prior to joining Rushall, where he spent the last four years.

Demico Burton is a young left back on loan from Derby County. He played for the Glassboys in a few games last season, before returning this term. He is also an England Schools Under 18 international.

Former Aston Villa junior central midfielder Alex Prosser was a new arrival earlier this season on a joint registration with Leamington. After a loan at Brackley he joined Kidderminster following his release from Villa and spent a year with them until his move to Leamington.

Just over a month ago Norwegian born winger Stanley Anaebenam arrived at Stourbridge from Hednesford and immediately became a first-choice starter. He first came to the UK from IFK Youth and joined Wolverhampton Casuals. After spells at Solihull Moors and Redditch he spent 10 months in Ireland with Shelbourne, before joining Truro City on his return to England.

Dexter Walters is also a winger who spent some time at Mickleover on loan from Tamworth at the end of 2021. He started his career with Romulus, before a couple of seasons at Coventry City, from where he returned to Tamworth on release. Following his Sports loan, he moved onto Stratford, before moving to Stourbridge in November.

Jaiden White has only just joined our hosts on loan from Stafford Rangers. He played junior football at Wolves and Coventry as well as a spell at Kidderminster, before joining Stafford and plays striker or winger.

Lewis Solly is both reserve goalkeeper and coach. An ex Wolves and Bury player, he played for Welshpool and Aberystwyth, before moving back to the midlands with Stafford Rangers.  He was then at Telford and Redditch and first came to Stourbridge in 2005 from Hednesford, and stayed eight years before moving to Rushall. He moved onto Worcester but had time out with an injury and has been back at Stourbridge since the end of last season, having made over 350 appearances.

It’s a grass pitch at the War Memorial Athletic and kick off is due at 3pm, but weather could still play its part.