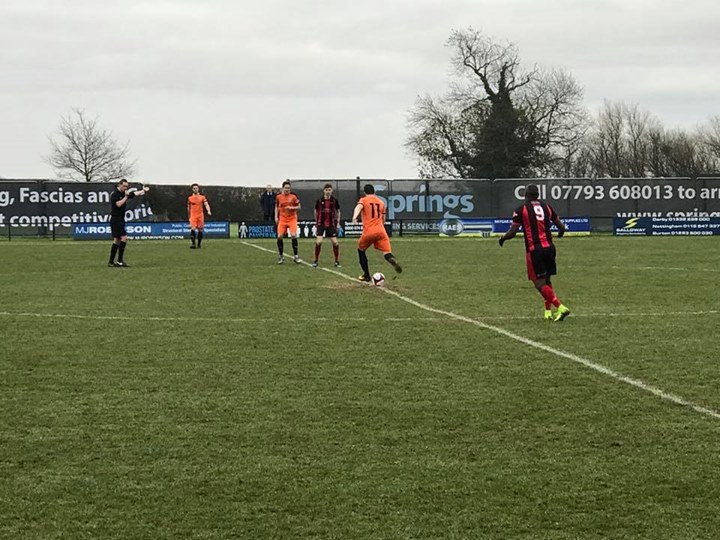 The margin of victory was only the one goal, but could easily have been more but for Jake Eastwood in the home goal.

The two teams went into the fixture locked together on 37 points although visitors Nantwich had games in hand.

The early stages of the game were tight although it was the visiting teams who appeared to be enjoying the bulk of the attacking play, with the best early chance falling to Danny Schofield whose curling shot in the 14th minute was off target. It wasn’t until the 37th minute that Sports went that close again with Clinton Morrison firing over after good approach play.

The moment that undoubtedly changed the game in the 41st minute as Ben Turner slid in a tackle on Wayne Riley.  After consultation with his assistant (who appeared in a worse position than him) to pass judgement he showed Turner a straight red. Referee Watson had shown a seemingly cavalier approach to awarding free kicks, and bookings up to that point choosing to award or not at random.

The sending off may well have been valid, but due to his previous decision making left parts of the crowd confused.

Irrespective of this it meant Mickleover would have more than an entire half with a one man disadvantage.

Nantwich tried to make the most of their numerical superiority but it took them until the 79th minute to make their breakthrough – which in itself says a lot for Sports resolve.

Whatever controversy had come before there was no doubt about Ben Harrison’s strike from just outside the area that settled the tie.

The hosts tried to force their way back into the contest, with the introduction of the lively Jake Dickinson, and ultimately pushing Pablo Mills up front.

The visitors had a late chance to double their lead but the shot from Josh Hancock rattled the woodwork before flying clear.