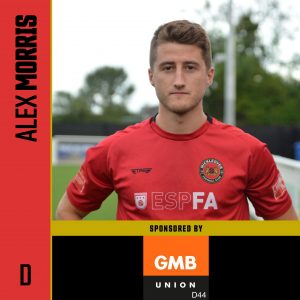 Stoke on Trent born school PE teacherAlex began his career as a Port Vale Junior, playing regularly in their reserve team before moving on to Leek Town.

He had spells at both Nantwich and Newcastle Town, before finding a home at Kidsgrove Athletic in 2018, where he stayed until the end of last season.

Mainly playing at left back, over the last two years he played every minute of every competitive game for Kidsgrove, before joining Mickleover this summer with Kidsgrove team mate James Butler.

Alex was first choice left back last season and one of the mainstays of our table topping defence.