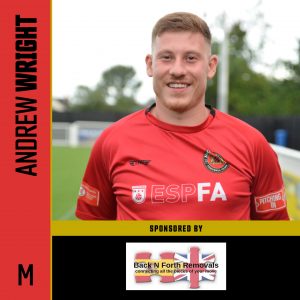 He started at Chesterfield before becoming a Lincoln City youth scheme product. He spent two years at Sincil Bank, before having the first of his two spells at Grantham.

After one year he moved on again to Coalville for a year, preceding a three-month stay with Matlock Town in July 2019.

He went back to Grantham in September 2019, but after a couple of months he came to the Don Amott Arena and made his debut in the home game against Radcliffe that November, scoring his first goal against Grantham in January 2020.

Club vice captain and a motivator both on and off the field, always leading by example. Always looking for that shot on goal but at present he is recovering from a knee operation, but hopes to be back in action in September.