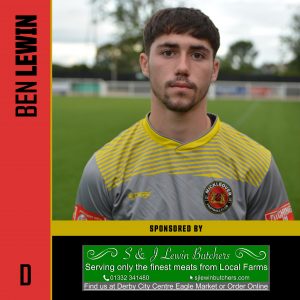 Ben started off as a winger, but as he has got older he has settled into the role of attacking wing back.

He spent four years in Derby County’s Junior scheme, but left when he was 13.

After leaving school he joined the Mickleover Academy and was part of last seasons Regional and National Academy title wining side, as well as a regular in the Mickleover Reserves.

He  played in a number of pre-season games with the first team, and made his league debut in the home game against Gainsborough and scored our only goal in the FA Cup defeat against Basford.