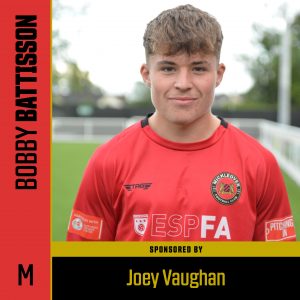 Having started his footballing career playing for Malaga in Spain, Bobby was spotted by Burton Albion on his return to the UK, while playing for a local side.

An energetic hard working midfielder with an eye for a goal, Bobby came to Mickleover after three years with the Brewers, during which time there had been interest from a number of league clubs.

He made his debut as a sub at the end of last year and was a key member of the Mickleover Academy side, winning both the Midlands and National title and a regular in the successful reserve side..

His preferred position position is attacking midfielder and his footballing hero is Lionel Messi.

Now a key member of the first team squad, Bobby made his first start in the opening game of the season at South Shields.