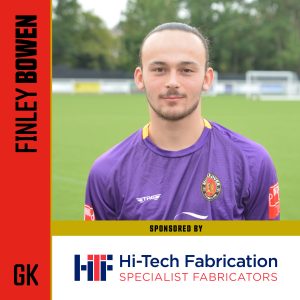 Fin is a graduate of Mickleover’s own Academy and has played a number of pre-season friendlies for the first team, but is yet to make his competitive debut.

A goalkeeper with natural ability, he started playing at Winshill as a seven year old, but after two to three years moved to the Mickleover junior ranks.

Despite his young age he has taken to being part of the first team squad in his stride and is the reserve sides regular keeper, as well having been on the bench for the first team too and had trials with league clubs.

He has started a number of the pre-season games and made his league debut at Leiston.