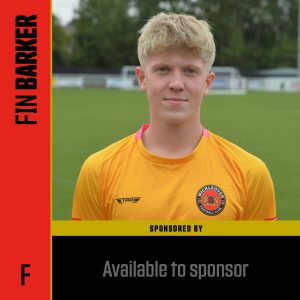 Having started his football journey at Aylestone Park Juniors, Fin came to the Mickleover junior ranks and was part of last seasons Regional and National Academy Championship winning team.

He originally had thoughts of becoming a goalkeeper rather than a goalscorer, until a coach at Derby County’s Moor Farm suggested otherwise.

But it was Aylestone coach Adam Hart that introduced him to the realisation of organised football and wanting to be part of it.

He has been a regular in the Mickleover Reserve side over the last two years and was top scorer with over 30 goals and made his NPL league debut for Mickleover as a second half substitute against Matlock Town in October.

He started this season on trial with Coventry City.