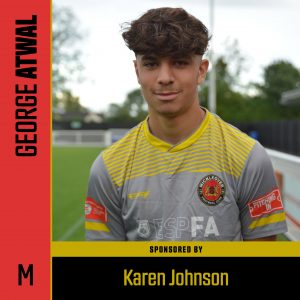 George has come through the Mickleover Academy having signed up in 2020. He had trials at Leicester City and Derby County as a 12 year old and more recently with Stoke City.

A central midfielder, he can also play holding midfield or wing back and has become a set piece specialist, with free kicks and penalties.

He was part of last season’s Regional and National Academy title winning side and a regular goal scorer in the reserves too.

After being part of the first team squad during pre-season, he made his NPL as a sub in the home win against Gainsborough, but still awaits his first start.