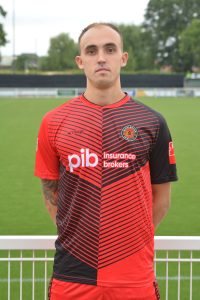 A Stoke City Schoolboy and Academy player for nine years, James became a regular in the Potters Under 18 and Under 21 Premier League teams, a solid dependable centre back.

But it was during a loan at Kidsgrove Athletic, that Butler impressed their opponents in an FA Cup tie and he was offered a work experience stay at Hartlepool.

He spent two months in the North East, but didn’t manage to break into the first team squad and returned to Kidsgrove.

Stoke City retained an option on him as he became a regular at the Grove, but during the summer of 2020 both he and team mate Alex Morris made the move to the Don Amott Arena.

His strength, dependability and old school style of no nonsense defending, soon made him a favourite with the Mickleover fans and he soon became established as a kingpin of the defence.

He has skippered the team on occasions and scored three goals last season.