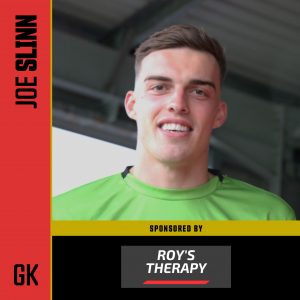 Joe is a 21 year old from Stoke on Trent, who started his goalkeeping career at Port Vale.

During his spell at Vale Park he also had a four month loan spell at Stalybridge Celtic. He signed professional in February 2017 having captained the Youth team, before moving to Walsall in 2018.

He went out on loan again to Rushall Olympic for most of the 2018/19 season before leaving Walsall in August 2019.

After a few months with Atherton Collieries, he had another four months with Alvechurch, before moving on again to Newcastle Town in February of this year.

He joined Mickleover in summer 2020 and shared first team duties with Hawkins throughout the aborted season.