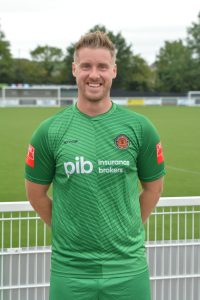 An experienced goalkeeper and experienced coach, he started his career as a Rotherham Junior.

After moving onto Halifax and Ossett he tried his luck in Australia with Brisbane Roar and Mitchelton in 2007/08, before returning to the UK at Harrogate.

Having alternated between Harrogate, Wakefield and Halifax over the next couple of years, he then joined Tamworth in July 2011 and added to his England C Caps.

Cambridge Utd was his next stop, before a loan at Southport preceded a move to Grimsby Town. A further loan at Matlock was followed by North Ferriby and Telford, before arriving at Gainsborough in May 2015.

He spent just over a year at Gainsborough, before joining Sheffield FC after an 18 month lay-off and came to Mickleover last Christmas after a three-year spell and 66 appearances at Sheffield.

During the latter years he has also ran the Barnsley goalkeeping school and has helped coach a number of well-established keepers.