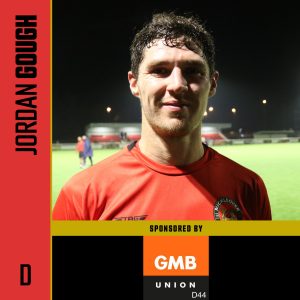 Born in Burton on Trent, Jordan began his footballing as a Derby County Junior, before his release sent him to Gresley Rovers via Stapenhill in 2008.

Initially he started as a striker, before becoming a left or centre back, making his first team debut for Gresley in 2009.

After five years at Gresley he joined Solihull Moors where he spent the next four years, before moving on to Brackley in 2017.

Further moves have taken him to Telford, Chester, Boston Utd and Tamworth, before a brief stay at Nuneaton preceded his arrival at Mickleover.