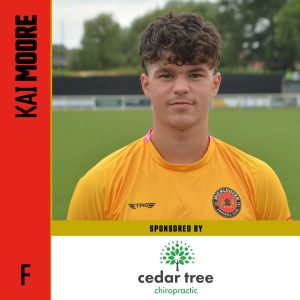 A home grown talented young striker who worked his way from Mickleover Under 16’s into the 20/21 National and Regional Academy title winning squad.

He had a few games in the reserve team too, but was offered the chance to join Carlton Town at the beginning of last season

During loans at Borrowash Victoria and latterly at West Bridgford, he began to prove his worth as a prolific goalscorer.

10 goals in his last five games at West Bridgford and he was offered the chance to rejoin Mickleover towards the end of last season and is now as part of the first team squad, scoring his first senior goal at Bamber Bridge last March.

He has found the net in some of the pre-season games and is one for future.