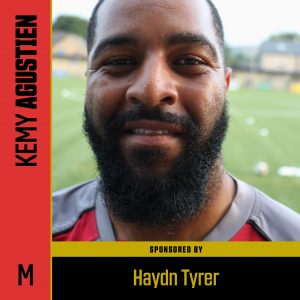 His career started with his home town team of Willem II in the Netherlands Antilles.

After two years as a junior he signed professional in 2004 and played 55 games in the Dutch Eredivisiewhere his midfield skills flourished, before moving to AZ Alkmaar.

Although he was with AZ for four years, scoring two goals in his 25 games, he also had loans at Roda JC and played 20 games for Birmingham City in the Championship.

A further loan at RKC Waalwijk preceded a permanent move to the UK with Swansea City. He played 47 times for the Welsh side in both the Championship and Premiership, winning the League Cup with them in 2012/13.

He had a loan spell at Crystal Palace, before joining Brighton, playing 17 games between 2013-2015, before moving to Denmark with Vendsyssel.

The next stop was the Scottish Premiership with Hamilton Academicals, then back to the Netherlands with Dordrecht and SV Tec, with a spell in the Philippines at Global Cebu in between.

His first non league team in the UK were Nuneaton, but moves to Halesowen, Barrow, Wrexham and Bradford Park Avenue were followed by his move to Mickleover at the end of last season.

He also gained International honours with the Netherlands at Under 19, 20 and 21 levels and played 13 times for Curacao, winning the 2017 Caribbean Cup.

Kemy trained with Mickleover in pre-season and scored a classy goal in the friendly against Clipstone, prompting to resign for this current season.

His class on the ball is unquestionable, as is his character, as a valued and talented midfielder.