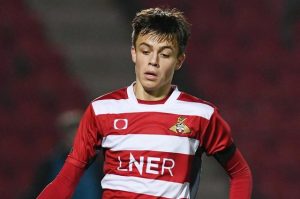 Liam is a midfielder who returns to Mickleover for a second loan period.

Son of assistant manager Ricky, he has been at Doncaster Rovers since the age of 11, making his first time debut in the FA Cup in November 2020.

He made seven first team appearances at Mickleover before Christmas, having previously been at Matlock and then had a month at Telford before returning to Doncaster.

After making his League One debut in December, he has made seven first team appearances and now returns to Mickleover for a two month stay.

He has also been in the Northern Ireland Under 21 squad for their European Championship ties.