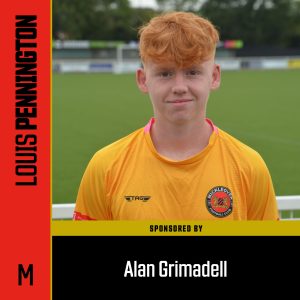 Louis is Mickleover through and through having been through the under 16’s before becoming part of the Academy that won the National and Regional title in 2020/21.

A tenacious young central midfielder he had already been on the bench for some of the pre-season games in 20/21 and seen some second half action, as well as having useful experience playing with the reserves too.

But a serious early season knee injury right at the beginning of last season kept him out of action for the whole campaign.

He is now fully fit again and playing to continue his progression through the squad.