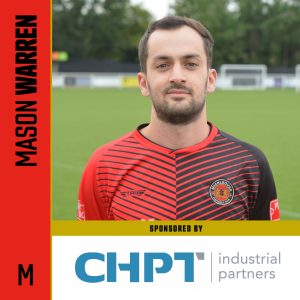 Born in Doncaster, Mason came through the junior ranks at Rotherham Utd, signing professional in May 2015 and spent three years with them.

He had a number of loan spells during his time at Rotherham, including Sheffield, Harrogate Town, Grantham, Matlock, Boston Utd, North Ferriby and Gainsborough Trinity and made one start for the Rotherham first team in the EFL Cup in 2016.

He was released at the end of the 2017/18 from where he joined the Mickleover squad, debuting against Gainsborough in August in 2018.

A strong playmaking midfielder, but Mason can also play in defence and assist in the attack, becoming a regular goalscorer and fans favourite.

He was captain of the side that finished top of the aborted NPL two years ago scored four goals last season. He is also the clubs regular penalty taker and deadball expert.