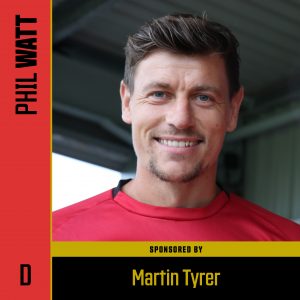 Phil was another who started his football path with his home town club of Rotherham Utd.

He moved on to Lincoln City in 2004 and spent four years at Sincil Bank, where he made his first team debut in the opening match of the 2007/8 season, and played again in an FA Cup tie against Nottingham Forest.

There had been a couple of loan spells at Grantham during his time at Lincoln, but for the next three years he was at Corby Town.

After another loan spell at Grantham, the dependable centre back made it a permanent move, but after one-season moved on to Boston Utd.

His next move was to Coalville Town where he scored two goals in his 12 games, before starting a long association with Belper Town.

In three different spells he reached the 150 appearance milestone for the Nailers, as well as scoring a winning play-off goal to gain them promotion and was twice voted into the team of the division during his stays.

He also had a spell at Lincoln Utd and Frickley Athletic in between his Belper experiences, from where he joined the Sports line-up during the summer.

He formed a strong central defensive partnership with James Butler early on, which just got stronger, as well as getting himself on the score sheet on a number of occasions too.

“Watty” was also the man who ran the first team squad zoom sessions to keep everyone fit during lockdown.