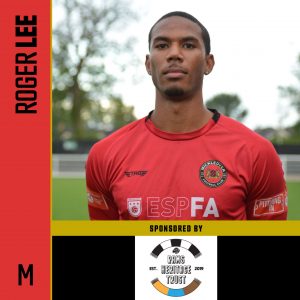 After a successful pre-season trial Roger has now become part of the first team squad, making his league debut as a second half sub at Buxton.

The Bermudan born midfielder started his career with home clubs Somerset Eagles, Bermuda Hogges and Robin Hood, before coming to the UK in 2014, where he joined Ilkeston Town with fellow Bermudan internationals.

He moved on to Weston Super Mare, Clevedon Town, Rugby, Stamford, Basford, Stafford and Loughborough Dynamo, before journeying to Latvia for a couple of seasons with FK Jurniek.

In 2019 he moved to JK Talinna Kalev in Estonia and had a year there before returning to the UK.

He has been capped by Bermuda as a full international and at under 20 level.