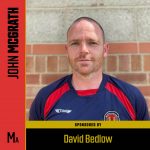 John took over the reigns at Mickleover after initially joining as a player. This move came after a successful playing career which saw multiple promotions with clubs such as Doncaster Rovers, Athlone Town and later Burton Albion. After 247 appearances for the Brewers, John enjoyed stints at York City and Alfreton Town before arriving at Station Road, and he hasn’t look back since as he and the boys look to build and grow as a squad as they look to push for promotion.