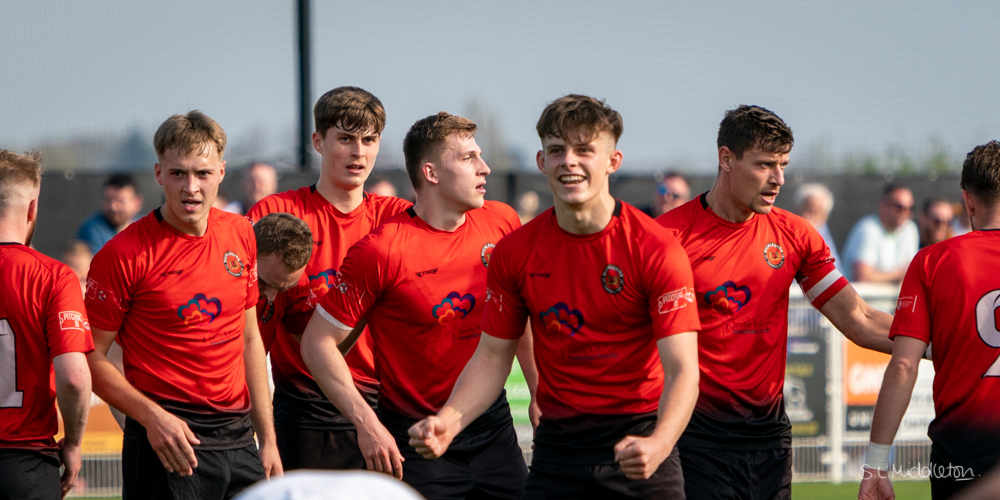 2021/22 will be looked back on as both a challenging but rewarding season.

The new 3G pitch not only put an end to the constant postponements, but brought in extra revenue to the club.

The delay and lack of pre-season availability after the well-publicised theft also had their part to play  however.

The season started with the tough trip to South Shields, suffering a 0-3 defeat before two consecutive home wins against Gainsborough and Ashton.

After going 1-0 up at eventual Champions Buxton, they fought back as 1-3 winners, but after the win at home to Hyde on August 30th, a double victory over Atherton in October and November were the only other wins before the New Year.

Injuries had hit hard and loss of form too in some cases. Paddy Webb, Alex Morris and Declan Bacon all left the club and keeper Callum Hawkins was recalled by Burton Albion.

Jake Bennett had picked up a serious knee injury and George Milner had a couple of injury spells, while the influx of loanees showed some promise and some not.

There were 17 games to play as we reached the new year and it was tight at the wrong end of the table, but out of those 17 games only three were defeats, which included the dubious home loss against Scarborough.

Ben Lewin had his first NPL experience and scored in the FA Cup defeat to Basford, but after Jordan Gough departed after only a few games Rhys Dolan and latterly Elliott Walker settled as wing backs.

Will Robinson and Ethan Mann both got useful time with the first team and both Phil Bateman and Burton loanee Ben Radcliffe spent time in defence as well as midfield, until Bateman was injured too.

Andrew Wright was coming from injury too but still gave his usual 110% effort, while Andy Dales looked strong in early season but faded a little, before a strong finale when once again his pace was critical.

It was another good season for Kemy Agustien, a calming influence on the ball, with some trickery and a constant threat.

After his early season injury Mason Warren took time to get back to form, but was another reliable midfield performer.

Liam Ravenhill spent the season with loans from Doncaster Rovers. It was noticeable that after a spell in the Doncaster first team, he returned to Mickleover looking much more confident.

Jake Scott came back for a few games in a variety positions and George Atwal got his first team debut,

But it was at the front where some difficulties lay. With Milner missing Stuart Beavon was the only regular starter and the frustration began to show.

There were a few loanees who failed to impress, so Shaquille McDonald made his Mickleover return and added some verve to the frontline.

Jahvan Davidson-Miller came in too but was mainly on the bench and Callum Niven showed promise when he came over from Burton on loan.

Both Josh Satchwell, Fin Barker and latterly Kai Moore had spells in the squad too.

So how did gaffer John McGrath feel the season had gone?

“I was delighted how things started, with the pitch etc and the team we had. Then in October and November we had lots of injuries and that was causing us a big problem.”

“From January though it was probably promotion form, so I wish there had been another six or so games and we could have reached the play-offs.”

“I was super proud of the lads to finish 12th though, and I always had faith in our method’s and we never came away from that. We have the youth system and recruitment just right and knew we would probably finish about half-way,”

“We have one of the best coaching staffs outside the league with Paul Groves, Ricky, Steve, Pablo and Jonah and being team manager it’s an important figure over the whole club not just the first team. I am a hands on a tracksuit manager, but will wear a suit when we get to the Premiership.”