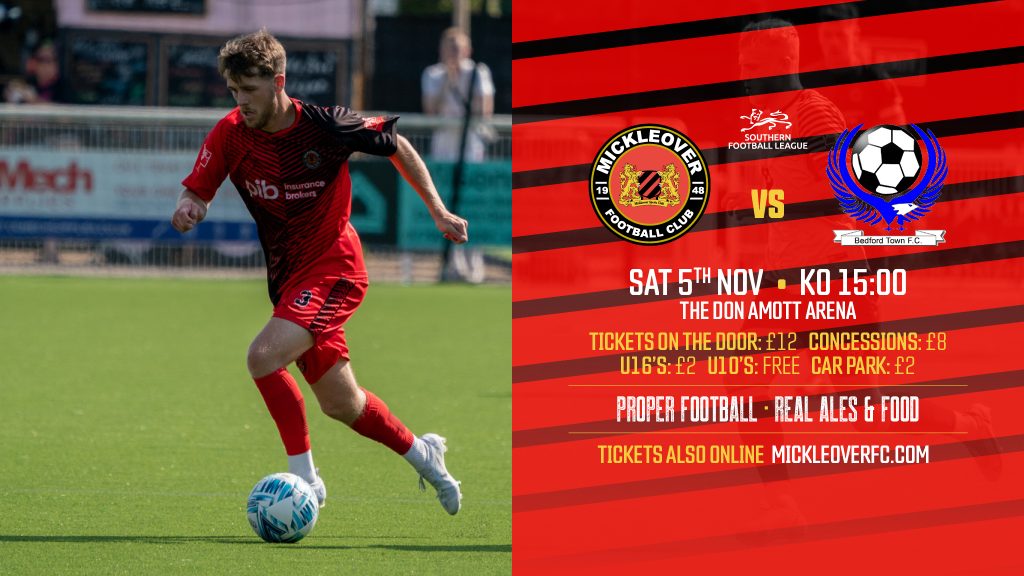 Following their tough win over Basford on Tuesday night, Mickleover will be hoping to make it five wins in a row, as newly promoted Bedford Town visit the Don Amott Arena.

Currently 10th in the table, it’s been a mixed season so far for Gary Setchell’s team, but they have won two of their last four games, drawing 0-0 at Needham Market last time out.

Setchell has been in charge since September 2020, having previously managed Wisbech and Kings Lynn. The former defender had a fairly lengthy playing career before turning to management, and is assisted by Darren Edey, who also served with him at Wisbech.

Keeper Alex Street started at Kings Lynn, but after a loan at Wisbech, went to Spalding, before making a permanent move to Kings Lynn. He was then loaned out again to Leiston, before coming to Bedford in October 2020.

Charley Sanders has spent most of his career in the Eastern side of the country, having started out at Boston Utd. He had loans at Grantham, Kings Lynn and Histon, rejoining Holbeach Utd in 2017 after a couple of years off. Two years at Yaxley then preceded his move to Bedford in October 2020.

Defender Luke Pennell arrived pre-season from Braintree, where he had spent exactly a year since arriving from Hemel. He started at Dunstable, and has also played for Dagenham & Redbridge, Maidstone and Gloucester City. He is currently on loan at Concord Rangers.

Jack Keeble was another summer signing, a centre back who began his career at Grimsby Town. He moved on to Stamford and St Neots and spent a year at Wisbech before joining our visitors.

Sam Dreyer originally came on loan last December from Stevenage, but the centre back’s stay became permanent in September. He also had loan spells at Biggleswade and Hendon.

Left back Sam Warburton was yet another summer signing. An ex-Northampton Town Junior, he started his non-league career at Rugby Town, moving on to Nuneaton, Kings Lynn, Corby and had year with Rushden & Diamonds before his move to Bedford.

Signed only a few weeks ago, right back Michael Harriman is a former Northern Ireland Under 19 and 21 International. He started off at QPR ands was loaned to Wycombe, Gillingham and Luton Town, before a permanent move to Wycombe in 2016. After a three-year lay-off he was at Northampton Town before joining our visitors and has made over 300 appearances during in spells in the Football League.

Midfielder George Thorne is well known locally after his spell with the Rams. His career started at West Bromwich Albion and was loaned to Portsmouth, Peterborough and Watford, before joining Derby in 2014.

He was loaned to Luton again and joined Oxford again after another loan. But injuries ended his full-time career and he came to Bedford in September after two years out. He was capped for England at Under 16,17,18,19 and 20 level.

Will Summerfield is a central midfielder and former MK Dons Junior. He was at Hemel, Kempston Rovers and Berkhamsted, before joining Bedford in July 2020.

Drew Richardson is another central midfielder who arrived in July 2020 too, from Biggleswade. He was a former Luton Town Junior.

Striker Craig Mackail-Smith has been with the club since September 2020. A full Scottish International, he started at St Albans City, moving on to Arlesey and Dagenham & Redbridge, before signing for Peterborough in 2007. After four years at London Road he moved to Brighton, but was loaned back to Peterborough, before joining Wycombe.

Further loans at Notts County and Stevenage followed before his move to Bedford. He played over 150 games in the Championship and over 500 in the football league, scoring 145 goals.

Connor Tomlinson is a young striker who has scored quite a few goals already this season. A former Luton Town Junior, he came to Bedford in July 2019.

Central midfielder Hugh Alban-Jones was a Peterborough Junior, before moving to Spain. During his two-year plus stay he played for Nolveda CF, Fundacion Benidorm, Lorca, Hercules and CD Llanes, joining Bedford on his UK return.

Afolahi Soyemi-Olalade is a striker signed a month ago from Hashtag Utd. He also played for Leatherhead, Romford, Westfield, Margate, Hayes & Yeading, Cheshunt, Grays and Park City Red Wolves in the US.

Diadier Camera is a midfielder on a dual registration with Peterborough Sports. He was at Tooting & Mitcham before moving to Italy with Santa Croce. Further moves to Gladiator and Budoni preceded his UK return.

Winger Kofi Halliday played for Bruno’s Magpies in Gibraltar before a move to Sweden with Stenungsund. He returned to the UK with the Pick Up Academy, moving on to Fleet, Godalming, Hungerford and Hemel, joining Bedford pre-season from Hartley Wintney.

Joe Butterworth is a central midfielder in his second season at Bedford, after arriving from Stamford last November, following almost five years at Yaxley.

Defender Kai Phelan was a pre-season signing from Barton Rovers. He also played for Hitchin and YIK in Sweden, after playing as a Luton Town Junior.

Experienced midfielder Callum Donnelly first joined Bedford for the 2017/18 season but had brief spells away at Shefford Town & Campton and Biggleswade. He played much of his career at Hitchin and has also been at Stotfold, Barton Rovers, Cambridge City and Baldock. He is currently back at Stotfold on loan.

Previously at Kings Lynn, midfielder Danny Setchell in his third season at Bedford, while reserve keeper Elliott Duffy is a product of the club’s own youth scheme.

Midfielder Josh Page is another home produced player, but has also played in Australia with Perth Scorchers and been loaned to Dunstable Town and Eynesbury Rovers.

Former MK Dons defender Joe Steele was signed from Dunstable in November 2018 and has also played for Arlesey, while midfielder Dan Jarvis is currently on loan from Peterborough Sports. He’s an ex Yaxley, Barton Rovers and Biggleswade player too.