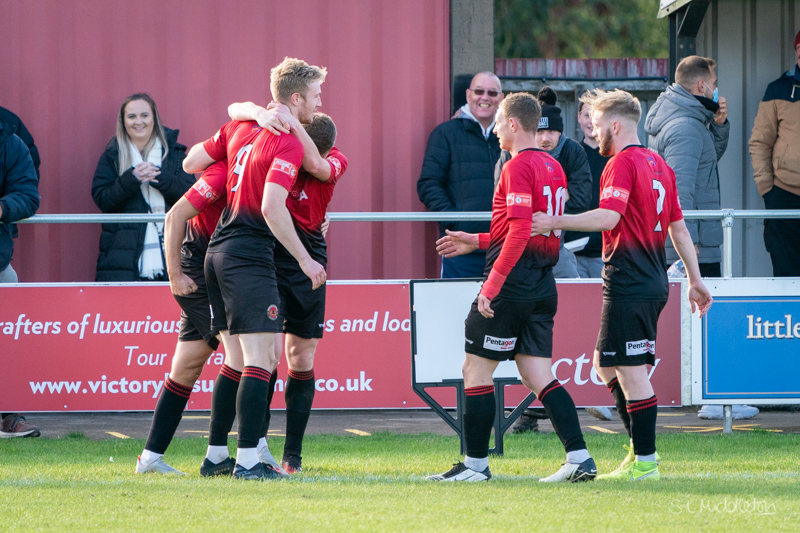 Mickleover increased their unbeaten run to five games in the NPL with a solid 3-0 home victory against a struggling Grantham Town side.

There was one change to the team that came home from Buxton with a point last Tuesday, as Andrew Wright was back in for Josh Satchwell.

Grantham had a clear chance in the early minutes of the game when Hawkins had to make a point blank save from Ashley Worsfold, but overall the first 10 minutes remained fairly even.

Sports first real attack came when a good build up found Bacon, who’s long shot was deflected out for a corner.

But Grantham responded calling on Morris to head clear on 13 minutes, quickly followed by a last ditch tackle from Ryan Holland, stopping a clear run on goal from Webb.

Butler took a free kick from inside Sports half that went out for a goal kick, but Grantham were still dangerous on the break and Morris had a to clear another positive attack after 19 minutes.

It continued to and fro as Bennett played through to Wright whose cracking shot went just wide of the post, before Grantham’s response was a long lofted ball into the area easily dealt with by Butler.

On 28 minutes Mickleover had another free kick in a better position. Agustien placed the kick into the box, where Butler’s glancing header was just wide of the mark.

Agustien was quickly on the attack again, but this time his cross was easily taken by Grantham keeper Jan Budtz.

The pressure was beginning to build on the visitors and when Bacon was fouled on the half hour, Wright and Agustien plotted the free kick.

Three minutes later Milner put Bacon through in space inside the box. Budtz stayed on his line, but Bacon’s shot was just wide of the post.

Bacon was foiled again with 10 minutes left in the first half, but another Agustien/Wright combination proved to be too far out to cause a problem for the Grantham defence.

It was nearly all Mickleover as half time approached, with Webb firing across the goal face with the block coming just before Milner collected.

After Grantham’s Ben Middleton was booked for dangerous play, Beavon finally opened the scoring on 40 minutes, wrong footing Budtz before slotting home in the bottom left hand corner 1-0, with the half time whistle soon following.

Beavon was on the attack again immediately from the restart, forcing Budtz to clear hurriedly for a throw.

The visitors earned themselves a free kick which Holland sent high and wide, and Butler had to make a clearance for a corner.

After 53 minutes Mickleover made it 2-0, when a quick counter brought a classy one two between Agustien and Beavon, before a long ball was chested down by Bacon, who then cut inside and fired it in to the visitors net.

Bacon found himself in space again only three minutes later, his pass was timed to perfection again, with Webb missing contact at the far post by inches.

Webb was still chasing his first goal of the season, but after collecting a 59th minute chip, his first time volley was easily taken by the Grantham keeper.

After a tame effort from Grantham was safely taken by Hawkins, Wright was the next to try his luck, with a shot from the edge of the box collected by Budtz.

Milner then took possession in the middle, found Webb, who played Wright through, but his first time shot cannoned off a defender for a corner.

Satchwell was the first change when he came on for Wright in the 65th minute, before Beavon got another break and his shot deflected over for another corner.

After Agustien was yellow carded, Butler gave away a free kick just outside the box, but Watt cleared any threat, then Brad Abbott tried his luck from well out, but was wide of the mark again.

Mills came on for Bacon, but Sports continued to create chances. Butler got to a header in the 79th minute, well held by Budtz, but after 82 minutes Satchwell was pulled back in the area and Webb buried the following penalty for 3-0.

Battison was the next sub on for Agustien and with three minutes left Butler and Milner combined giving the latter a run on goal with his shot blocked.

There was another penalty appeal too, but a free kick was awarded which Mills took just before the final whistle.

Another good all round solid performance from all quarters, which moves Mickleover back into sixth place in the NPL, with Hyde Utd the next visitors to the Don Amott Arena on Tuesday evening.