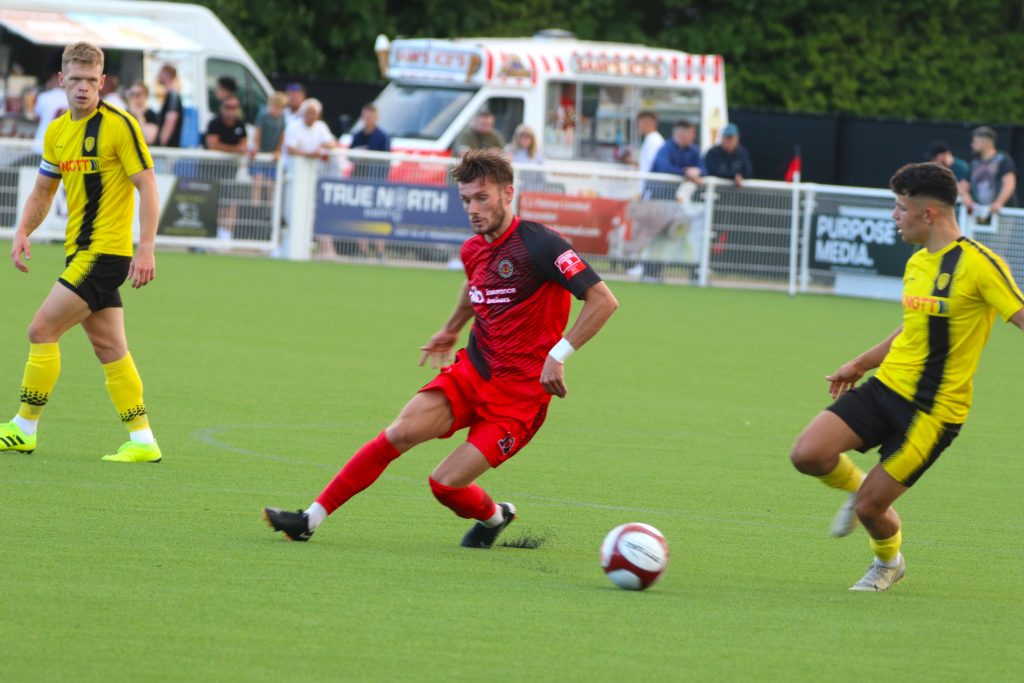 Mickleover’s experience and guile proved too much for a very young Burton Albion XI, taking a comfortable 3-0 win to retain the KC Trust Trophy.

After a few minutes of settling down Mickleover were straight on the attack, with Davidson-Miller having a fourth minute shot saved by keeper Dan Moore, after a Dales break.

There were penalty appeals waved away three minutes later when Chettle went down in the box, but although Mickleover were full on attack, Hedge was forced into action with a comfortable save after nine minutes.

As the Burton youngsters started to try and play out of their own half, there was a dangerous ball played into the box, but Butler headed away and Hedge safely took the catch.

But Burton were on a run and after a further plan broke down on the edge of the box, Hedge collided with a Burton striker, who continued after treatment.

18 minutes in and Dolan charged down the left to cross into a busy goal mouth, but Beavon’s attempt to connect was thwarted when he was held back.

Dolan was close himself only seconds later,when he almost connected with Davidson-Miller in the box.

But Burton keeper Moore almost handed a gift to Warren, when his poor clearance was intercepted but the followingshot was just wide.

The Burton defence were starting to face a continuous barrage, and when Dales outstripped his challenger, his cross was followed a Warren shot just wide of the post again.

The opening goal finally came after 28 minutes, following a corner, Dales played the ball in to Davidson-Miller who made no mistake for 1-0.

The remainder of the first half was almost sustained pressure, with Dales, Chettle, Bateman and Warren in total control of midfield, giving Beavon and Davidson–Miller the freedom up front.

Burton managed a slight break after 34 minutes, but Hedge was never seriously challenged, but the Burton keeper again put his own defence under more pressure with a poor clearance.

It was any one from five Mickleover players to takepossession, before Dales created his space for a 34th minute shot that Moore saved comfortably.

Davidson-Miller then had a shot blocked four minutes later, before Bateman’s rebound attempt went just beyond the top right corner.

With two minutes left on the clock Warren smashed in Mickleover’s second after another Dales build up, before Beavon went close on the right and Watt almost connected for a header with the half time whistle poised.

With no immediate changes for the second half, it wasn’t longbefore the attacks were underway again, with Dales hitting the far post after cutting in from the left after 47 minutes.

Over the next 10 minutes Mickleover were playing a keep possession passing game, which involved virtually the whole team until Chettle took a knock and was replaced by Horleston.

Both Mann and Dolan were regularly joining the attack with Butler and Watt covering at the back. It was a Dolan run after 58 minutes then sent Davidson-Miller close, before the wing back earned himself a free kick, from which Moore had to tip Dales’ shot over the bar.

With Pennington on for Watt, Mann moved into the middle of the defence, but it was a rare Burton attack that led to Mickleover’s third goal.

Nothing had materialised for Burton, but Dales picked up the ball on the edge of the Mickleover box and sprinted the lengthof the pitch, before cutting inside to chip the keeper for 3-0 after 70 minutes.

Moore and Ironmonger then came on for Beavon and Davidson-Miller and after 75 minutes it was Moore’s chance to shoot just wide after a good turn inside the box.

Hedge had to make a couple of fairly easy saves before the full time whistle and Davidson-Miller came back on for the last couple of minutes after Ironmonger took a knock.

A fairly easy win for Mickleover, but nevertheless a good pre-season challenge as we now look to Tuesday’s game against a derby County XI