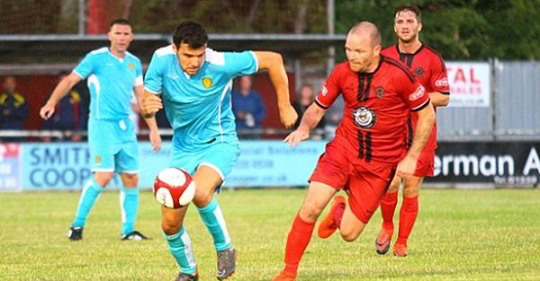 A hat-trick from James Cadman was enough to put Mickleover Sports through to the next round of the FA Cup after defeating Coventry Sphinx.

The game was a slow burner, but Sports found their hero in Cadman who stepped up and supplied his team with all three goals to help them advance into the next round.

Sports also made FA Cup history as manager John McGrath and his son Jay became the first father and son duo to play together in the competition.

It was a slow start for both teams in the game but it was evident that Mickleover were the more experienced and better drilled team as they kept control of the ball.

Sports continued to control the game as they moved the ball well, but they just couldn’t find a way to penetrate Coventry apart from the odd long shot.

Eventually  Sports’ class shone through when Jack Storer played a delightful ball over Coventry’s back four with the outside of his foot, allowing James Cadman the time and space to pick his spot and hand his team the lead.

Mickleover who were on the hunt for a second would have to wait a good 20 minutes to add to their lead. Half of that time was due to a floodlight failure which stunned unfortunately Sports’ momentum.

The second was definitely worth the wait though, as it put Sports in a comfortable position for the rest of the game. Cadman fired the ball from just outside the box into the bottom right hand corner after controlling the ball following a poor clearance.

Sports nearly added a third just before half time when Storer’s effort from just outside the box went narrowly wide.

Sports who had a comfortable lead at the break, showed why they were leagues above without really having to apply too much pressure on Coventry.

The start of the second half saw both teams make a change. Sports brought on Chib Chilaka for Nathan Modest, and the visitors replaced Max Howard with Ryan Palmer.

Just like the first half, nothing of note really happened in the opening minutes. The first moment of any note was the substitution of Jack Storer who made way for Tomas Junek.

Soon enough though, the game would light up once more. Mason Warren’s incredible solo run in Coventry’s box was nearly matched by his shot which smashed the part of the woodwork where the post and bar meet.

About five minutes later, Cadman completed his hat-trick when he tapped in Ben Turner’s cross from only a few yards out.

Although, Cadman was the star man, Chilaka was certainly making his presence felt. He was involved in a number of chances for Sports, the best being when he nearly scored a sublime solo goal from inside the box.

Chilaka dribbled the ball past four or five Coventry players before smashing the ball across goal which was almost certain to hit the back of the net.

Unfortunately for Chilaka Jake Scott threw himself at the ball, connecting with his head and subsequently heading the ball over the bar from only a few yards out.

Chilaka continued to push for his first goal in red and black, but clearly luck was not on his side.

In the last five minutes he hit the post after taking the ball round the keeper as well as having a goal ruled out for off-side.

It clearly wasn’t meant to be for Chilaka, but we’re sure he won’t mind as Sports progressed to the next round comfortably.

A win tonight was vital too, as it would have definitely raised the team’s morale, especially after losing to Witton Albion in their last game.

In addition to that, it will have boosted the team’s confidence ahead of their clash with Stafford Rangers on Monday.