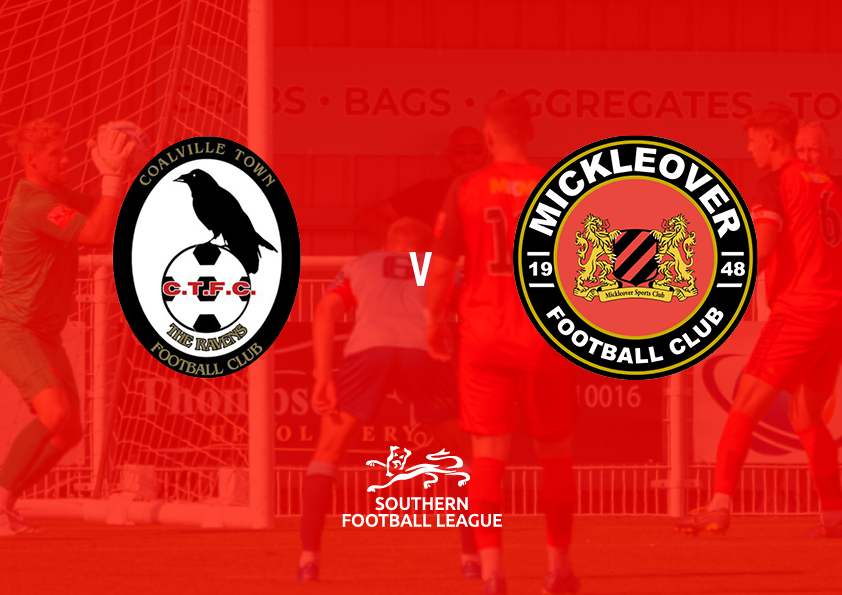 Back into fourth in the table after Saturday’s win over Stratford, Mickleover will be seeking revenge over Coalville Town, following their 2-4 win at the Don Amott Arena.

Manager Adam Stevens has managed to keep a fairly stable sign over the last couple of months, which has seen their league position suffer, but brought FA Cup success.

Formerly top of the table, they are now five points behind Mickleover, with three games in hand, currently eighth in the table.

Their win against Notts County will go down in club history, after it earned them the first round proper tie at Charlton Athletic.

Keeper Paul White came from Peterborough Sports in July, having started out with Cork City in his native Ireland.

Striker Ash Chambers was a Leicester City youth player, with over 200 league appearances under his belt, with the likes of Wycombe, Grimsby, York, Cambridge Utd, Dagenham & Redbridge, before non-league spells at Nuneaton, Kidderminster and Brackley. He came to Coalville after a year at Buxton and was on the scoresheet against scored their goal against Charlton Athletic in the recent FA 1sr round defeat.

Midfielder George Wilson arrived in July too. A former Blackburn junior, he played for Loughborough University after his release and had a spell in Sweden with Ljungskile SK before arriving at Coalville.

Midfield partner Tom McGlinchey can go one better, as he arrived from Leicester Road five years ago.

Defender Elliott Putman came in from Barwell in September 2021.  He started out at Leicester City and has also played for Stamford and Oadby.

Luke Shaw is another midfielder who favours the wing. He was signed from Grantham in 2018 and scored 12 goals last season.

The oldest player in the squad at 37 is midfielder Steve Towers, now starting his sixth year with the club since signing from Brackley. He started at Corby and has played for Rothwell, Stamford and Grantham too.

Striker Billy Kee came from Accrington in September 2020, but started his career at Leicester City. After a loan at Accrington he joined Torquay, before moving to Burton, Scunthorpe and Mansfield. He then spent five years at Accrington before his Coalville move.

Striker Ronnie Morley is a product of Coalville’s own youth programme and has also had a loan spell at Anstey Nomad’s. He made his league debut with two appearances last season.

Former St Etienne Junior centre back Herve pepe-Ngomi has just returned to the club, having left in September last year to join Barwell. He played junior football at Leicester City too and also played for Nuneaton, Boston Utd and Kettering.

Kick off as usual 7.45pm and it’s only about 20 miles down the road, so ALL the Red Army support will be more than welcome.