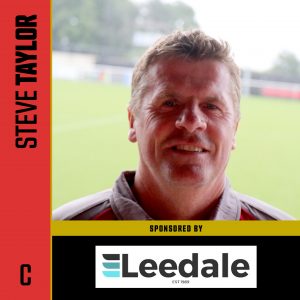 After six years as a player, injury cut his playing career short and he became coach to the under 18’s in 1992,  helped set up the Rams Academy and was George Burley’s assistant for a while

He finally left Derby after 20 years service in 2006 and having worked with Mark Robins previously, he joined him firstly at Rotherham, then Barnsley and Coventry City.

He returned to Derby in 2014 to manage the under 21’s, before coming to Mickleover at assistant manager in 2016.

With Robins returning to Coventry again a year later, Taylor rejoined him as assistant again in 2017, and was there until rejoining Mickleover as first team coach in December 2018.