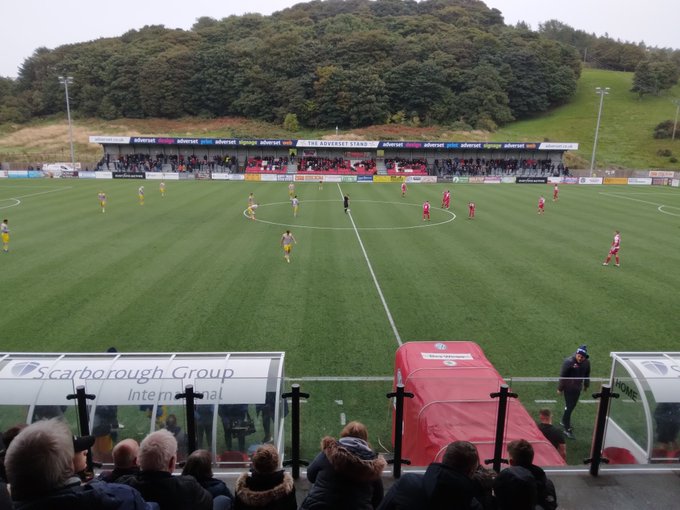 Words courtesy of the Scarborough News, with additional words by Peter Scherer

Mickleover’s visit to Scarborough last Saturday came within in a whisker of a  first away win of the season.

There were two changes from the side that lost at home to Witton Albion, with Alex Morris back in for Ben Lewin at left back. Ben reverting to the bench, where he was joined by the returning Kemy Agustien, who replaced Bobby Battisson among the subs.

For the hosts wing-back Josh Barrett made his first start of the season in place of the injured Bailey Gooda, and big striker Jake Day lined up alongside Nathan Cartman in attack, with Kieran Glynn playing just behind them.

Boro made a lively start, as Cartman played a ball across the box to Lewis Maloney who blazed his shot wide. Ryan Watson had a powerful shot blocked, then Jake Day had a strike deflected out for a corner, which was taken by Watson, and the ball dropped to Will Thornton, who stabbed his shot over the bar.

Lee Holmes fired wide in Mickleover’s first attack, then  Declan Bacon raced onto a through ball before lobbing Ryan Whitley, but wide of the far post.

Moments later Bacon blasted a shot wide, while at the other end Jake Day connected with an Ash Jackson cross, but headed straight at keeper Callum Hawkins, then Dylan Cogill had a shot blocked following a Watson corner.

Despite heavy rain, both sides contributed to an entertaining game, and Mickleover had a great chance to open the scoring on 35 minutes when the pacy Holmes burst down the left and cut inside before going down under a combined challenge from Weledji and Thornton.

Skipper Mason Warren fired the spot kick towards the bottom left corner, but Boro keeper Whitley dived to his right to pull off a super save.

The visitors ended the first half strongly, Bacon firing wide, then a shot from Holmes deflected off Cogill and against the post before being hacked clear. Just before the interval Boro’s Kieran Glynn headed a Jackson cross inches past the post.

The first half had been evenly fought and terrific to watch, but the second period was a big disappointment for the home fans, as Mickleover, with the wind and driving rain in their favour, dictated play throughout.

Thornton and Cogill were superb at the back, and Glynn showed touches of skill, but the visitors were well on top.

Whitley made a brilliant save to keep out a shot from Declan Bacon, although the offside flag had been raised, so a goal wouldn’t have counted, then James Butler had an effort deflected wide, and a lovely turn and shot from Holmes resulted in the ball fizzing narrowly over.

Whitley made a superb flying save from a strong James Butler header at a corner, but the home side couldn’t get any attacks going, but in a rare break forward, Day headed a Jackson cross into the arms of keeper Hawkins.

Jake Bennett accepted a pass from Holmes before firing just wide in another Mickleover attack, before they took the lead on 87 minutes when Stuart Beavon laid off to Holmes, who curled his shot into the net from the left edge of the area.

A fifth straight home defeat looked on the cards, but Boro capitalised on a disastrous error to snatch a last gasp equaliser, when Day did brilliantly to loft over a cross from the left into the goalmouth, keeper Hawkins fumbled the ball, and Cartman pounced to knock the loose ball into the net from close range.

So now its a short trip now the road to neighbours Matlock Town, now top of the NPL!