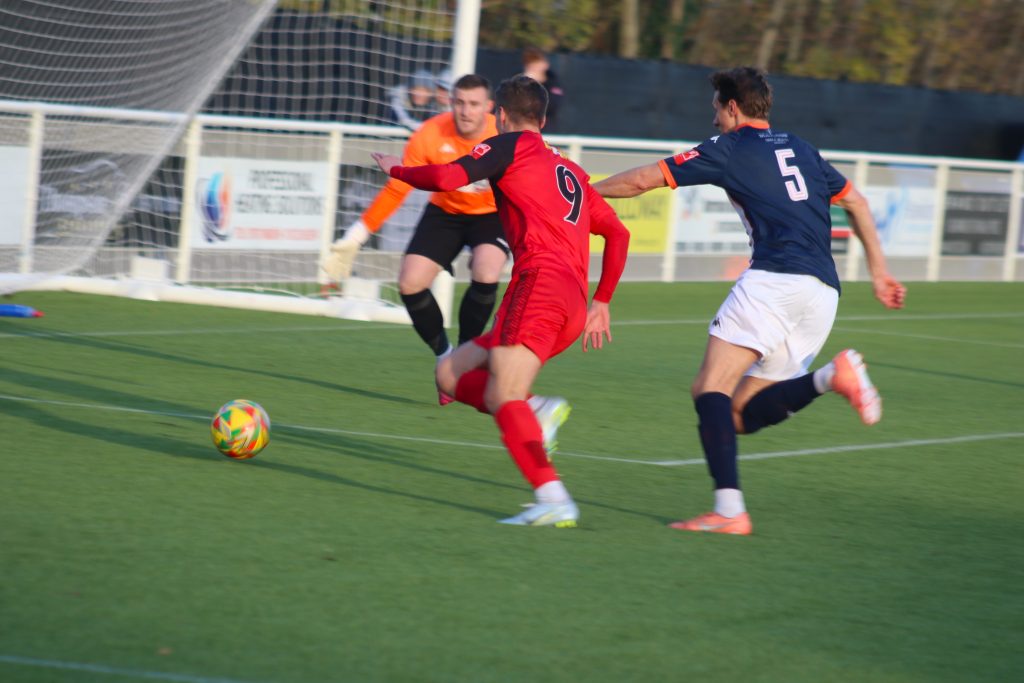 Mickleover returned to fourth in the Southern Premier League Central table after a 4-3 win against Stratford Town at the Don Amott Arena.

A strong opening attack from Mickleover saw Beavon charge through the visiting defence, with keeper O’Brien just reaching the ball ahead of the chasing Dales.

Only three minutes in Dales was through again and the keeper saved his shot with one leg as he was heading the wrong way.

The early pressure continued and only one minute later Reeves outpaced Martin Riley and beat the keeper on his near post, 1-0.

Reeves was nearly in on goal again two minutes later, once again outpacing the defence, before firing his shot into the side netting.

Stratford hadn’t really been in the game until they got a free kick on the Mickleover right. The ball was sent into the edge of the box, where Riley’s header found the back of the net for the equaliser, 1-1 after 15 minutes.

For about 10 minutes the Mickleover defence seemed to have gone to sleep and were lucky not to concede again.

William Grocott was clean through, but his shot was fired over the bar after 17 minutes and there was a succession of corners, from which the visitors failed to capitalise.

Reeves was then booked for a foul on Sam Wilding, who carried on with a bandaged head after a lengthy stoppage, but the following free kick was wasted.

In midfield Rose was having a mixed game, solid and dependable at times and giving the ball away at times too. In the 31st minute he lost possession and Andre Wright was clear. His initial shot was blocked, before Hedge made the save.

Dales then started a Mickleover attack, found Beavon, but the shot was blocked. Then Wilson combined with Dales down the left after 35 minutes, the ball was sent into the box, where Beavon’s effort was just wide again.

Sports were back in charge and looking strong, getting their reward in the 39th minute. It was Wilson and Dales combining on the left again, but this time Beavon pivoted and fired the ball in to restore the Mickleover lead, 2-1.

The attacks continued to flow with Yeomans and Greaves becoming more effective on the right too. But in the 45th minute Beavon was fouled on the edge of the box. A four-man wall was infiltrated by a grinning Greaves, but Wilson stepped up and fired his kick straight over the wall into the roof of the net, to send us into half time 3-1 up.

With Stratford having failed to win way this season and a two-goal lead, there was quite rightly an air of confidence, but that soon changed.

Hedge was called into action after 50 minutes, when Watt lost out in a chase. Hedge came out and half saved, but the rebound fell to Grocott and it was 3-2.

Reeves had taken a knock on his ankle in the first half and was replaced by Osideko, but Sports pushed forward but continued to look susceptible to the breaks.

As the hour mark approached, Hedge had to tip a Wilding effort over the bar, but Stratford continued to push for the equaliser again, which again left their defence vulnerable.

Dales sent a long ball over the defence, but it was too long for Osideko to catch and then Butler had a charge from defence and had his effort saved by O’Brien.

Stratford were still looking dangerous though and Jamie Molyneux crossed for a fellow striker, who fired over with the goal at his mercy.

Molyneaux then got through himself after pushing Wilson out of the way, he was clear on goal and put it wide though, as Mickleover had gone from comfortable looking winners, to holding.

73 minutes and Osideko was clear, after calls for offside were waved away, he chipped the advancing keeper, but his shot hit the far post and went out.

Hedge was then busy keeping the visitors out, with a 75th minute save, followed by another string of corners.

Both sides were looking for points from the game and Beavon almost found Dales, but the ball was too long, before Warren was brought on for Greaves.

Beavon continued his tremendous work rate and with 10 minutes left sent Dales down the left, but his pinpoint pass missed Rose’s right foot by just inches.

86 minutes and Mikey Taylor broke through the defence and it was level again 3-3, so Mickleover swapped Scott for Rose for the battle to the final whistle.

There was time to be added on but in the final minute of normal time Osideko was clear again, but this time on the left. He was on side and had the keeper beaten from a tight angle, his first goal and Mickleover were back in front 4-3.

The three points were secure but it hard been a tough second half, with some woeful defending at times, as the absence of Dolan and the combination Butler, Watt and Mann at the back just didn’t seem to flow.