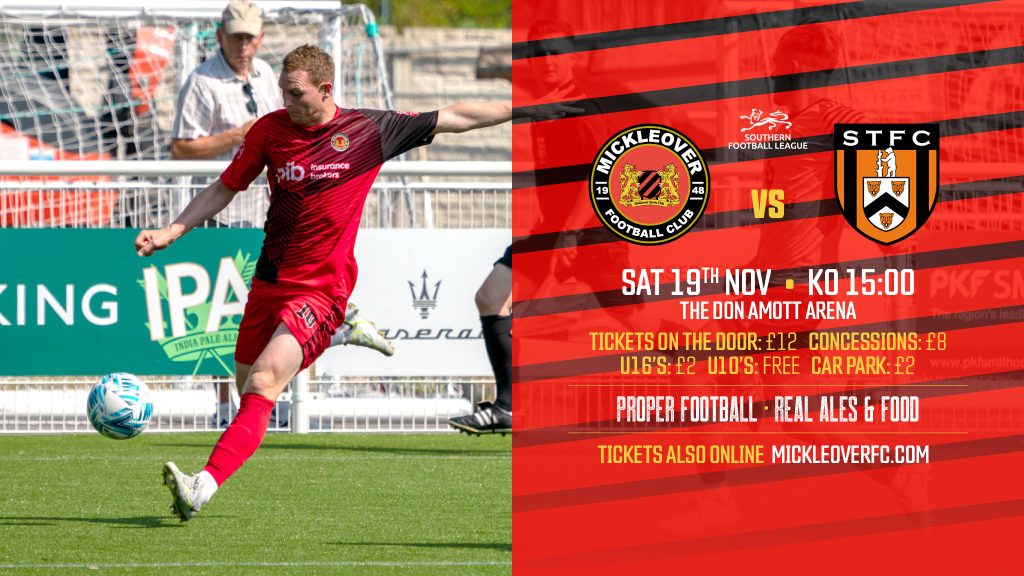 Following the disappointment of last Saturday’s late defeat at Redditch and Tuesday’s postponement at Alvechurch for the second time, Mickleover will be looking to get back to winning ways this Saturday.

Stratford Town are the visitors, who are currently 17th, drew 1-1 at Coalville in their last league match, but haven’t had a win in their last eight. They are still seeking their first league win on the road, having drawn three times. Their last win was on October 22nd 4-2 against Needham Market.

Ex Forest Junior midfielder and Bromsgrove manager Gavin Hurren has been in sole charge since September, when co-manager and former Rams player and assistant manager Dean Holdsworth left the club.

Having already used well over 30 players this season, there has been little stability in the starting line-up. Liam O’Brien, Luke Bell, Leon Phillips and Louis Beresford have all started in goal.

O’Brien is a former England Under 19 International, who made 62 League Two appearances. QPR signed him as junior from Ruislip, before he moved on to Portsmouth. After a loan at Eastbourne, he joined Barnet on his release, and after another loan at Eastbourne signed for Brentford.

He moved on to Dagenham & Redbridge, before going back to Portsmouth. Stays at Coventry City and Yeovil followed, before coming to Stratford in November 2020.

Luke Bell is on loan from Coventry City and was previously part of the Wolves Academy. Phillips arrived from Alvechurch in September. He started at Nottingham Forest, moving on to Mansfield, Cheltenham and Kidderminster.

Beresford has come through the Bards own youth scheme, but they also have also signed Nial Maher from Banbury. He was a Tividale Junior before joining Morecambe. After a loan at Halesowen, he returned to Tividale, moving on to Stourbridge, West Super Mare, Gloucester City, then another spell at Tividale, before joining Banbury.

Signed in August 2021, midfielder Dan Lafferty is a former Northern Ireland Under 17 International, who came through the ranks at Coventry City.

Sam Wilding is a defensive midfielder who was a junior at both West Bromwich Albion and Sunderland. After a loan at Leamington, he joined Hednesford on his release, joining Stratford last month.

Will Grocott is another midfielder and he started his career at Aston Villa. After spells at Tamworth and Loughborough he went to Canada, playing for Kitchener-Waterloo Utd and Toronto Lynx. He returned to the UK with Rugby and Tamworth before his first spell at Stratford. After a year at Stourbridge, he came back to our visitors in 2020 and is club captain.

Ashley Sammons is another midfielder too, who started out at Birmingham City. He has had a long and varied career that has taken him via Hereford, Worcester, Redditch, Corby, Hednesford, Solihull, Rushall and Halesowen, before joining the Bards in August last year.

Centre back Paul McCone was a pre-season arrival from Halesowen. He started at Wolves and has also played for Stourbridge, Leamington, Hednesford, Telford and back to Stourbridge.

Fellow centre back James O’Neill started off at Telford before joining Welsh League Newtown. He returned to Newtown a second time after a spell at Chasetown and came to the Bards pre-season after a year at Stafford Rangers.

Striker Andre Wright arrived only last month from Kettering. As a West Bromwich Albion Junior, he was loaned out to Kidderminster, Torquay and Coventry, before a permanent move to Kidderminster. He moved on to Nuneaton, back to Torquay, Gloucester and Halesowen, before going to the Republic of Ireland with Bohemians.

After spells at Ayr Utd and Sligo Rovers, he joined Telford in January, followed by a spell at Hereford before joining Kettering at the start of the season.

Former West Bromwich Albion Junior left back Taylor Morrison arrived from Littleton in August. He first joined Stratford in 2018, having gone to Alvechurch following his West Brom release. He returned to Alvechurch after a couple of months, before moving on via Evesham, Redditch, Worcester City and another Alvechurch return, then a five-month spell at Littleton followed a short stop at Tamworth.

Josh Hawker is a central midfielder and former Birmingham City Junior. He was signed from Halesowen in July and played for Redditch too.

Former Brentford Junior midfielder Jesse Akubuine spent much of his career in Scotland too. From Brentford he joined Queen of the South, who loaned him to Dalbeattie Star and Broomhill Glasgow, before moving to Cumbernauld. On his return to England, he joined Rushden & Diamonds, from where Stratford signed him a couple of weeks ago.

Teenaged midfielder Felix Miles only arrived last month too. A former Cheltenham Junior, he was loaned to Tuffley Rovers and Evesham before joining the Bards on his release and is yet to make a start.

Right back Patrick Zito arrived in August on his release from Aston Villa, he is yet to make a start too.

Centre back Martin Riley came from Hednesford at the beginning of this month. He was a Wolves Junior, before moving to Kidderminster, Cheltenham, Mansfield, Wrexham, Halifax, Alfreton, Hereford, Stourbridge and Tamworth.

Dan Vann is a centre back to, having been at the club for three years since arriving from Walsall. He was also loaned to Stafford, Matlock and Chasetown during his time with the Saddlers.

Striker Mikey Taylor made his debut in the last game after signing from Bromsgrove. It’s his fourth spell with the Bards, having joined originally from Worcester in 2017. He has also played for Leamington, Stourbridge, Tamworth and Halesowen, and found the net on his recent visit to the Don Amott Arena with Bromsgrove.

Defender Carl Dickinson is the most recent signing, yet to make his league debut. A former Derby Youth player with 500 League games under his belt, he came through Stoke City’s Academy too, being loaned out to Vikingur in Iceland, Blackpool, Leeds, Barnsley and Portsmouth, before joining Watford permanently.

He was loaned to Portsmouth again and Coventry, before joining Port Vale. Further moves took him to Notts County and Yeovil, and he has been at Hanley Town for the past year.

Right back Aksum White is a recent arrival from Coleshill. Another former West Brom Junior, he has played for Tamworth, Khalsa and Worcester Raiders too.

Former Darlaston striker Cameron Philp is a squad player, and prolific scorer for our visitor’s reserve side, while Sacha Everard, Christian Isechei, Paddy McGrory and Callum Monaghan have also come through the ranks too.

Kick off at the Don Amott Arena is 3pm as usual and the bar will be open.