Stafford had only dropped one point so far and had previously been 3-1 winners at the Don Amott Arena.

Once again it was Stafford with the upperhand throughout, taking a 2-0 victory.

Mickleover FC Academy first years suffered their third successive defeat, after going down 1-0 at Carlton in the ESPFA Midlands Division.

The Black squad have struggled since their win against Belper in the first game of the season, but had held Carlton to 0-0 at half time.

In the second half Kyle Fawsitt opened the scoring for Carlton and with the Mickleover side unable to respond, the Nottinghamshire side sealed their first points of the season.

Mickleover first year Academy suffered a 2-0 defeat on their visit to Rushall Olympic.

The Black group had won their opening game at home over Belper Town, before losing to Stafford Rangers at home before the Lockdown.

Rushall had also had one win against Carlton, having succumbed to Stafford too in their first game.

But Mickleover failed to penetrate the home defence on this occasion and will be hoping for better fortunes when they are way again next Thursday at Carlton Town.

Mickleover FC Student Of The Half Term – Emilio De Abreu

Congratulations to Emilio De Abreu of Mickleover who was named as their student of the half-term. His tutor, Ben Cocker said:

Emilio has made an excellent transition into further education. Since the start of this academic year, he has shown excellent understanding of the key topics we have studied. He is a very intuitive individual and has shown excellent capabilities within his written work and assignment submissions so far in Units C1, B and 5. Emilio is a very polite student and has been a role model to others in his approach to both his education and physical development within training sessions. Keep it up Emilio! 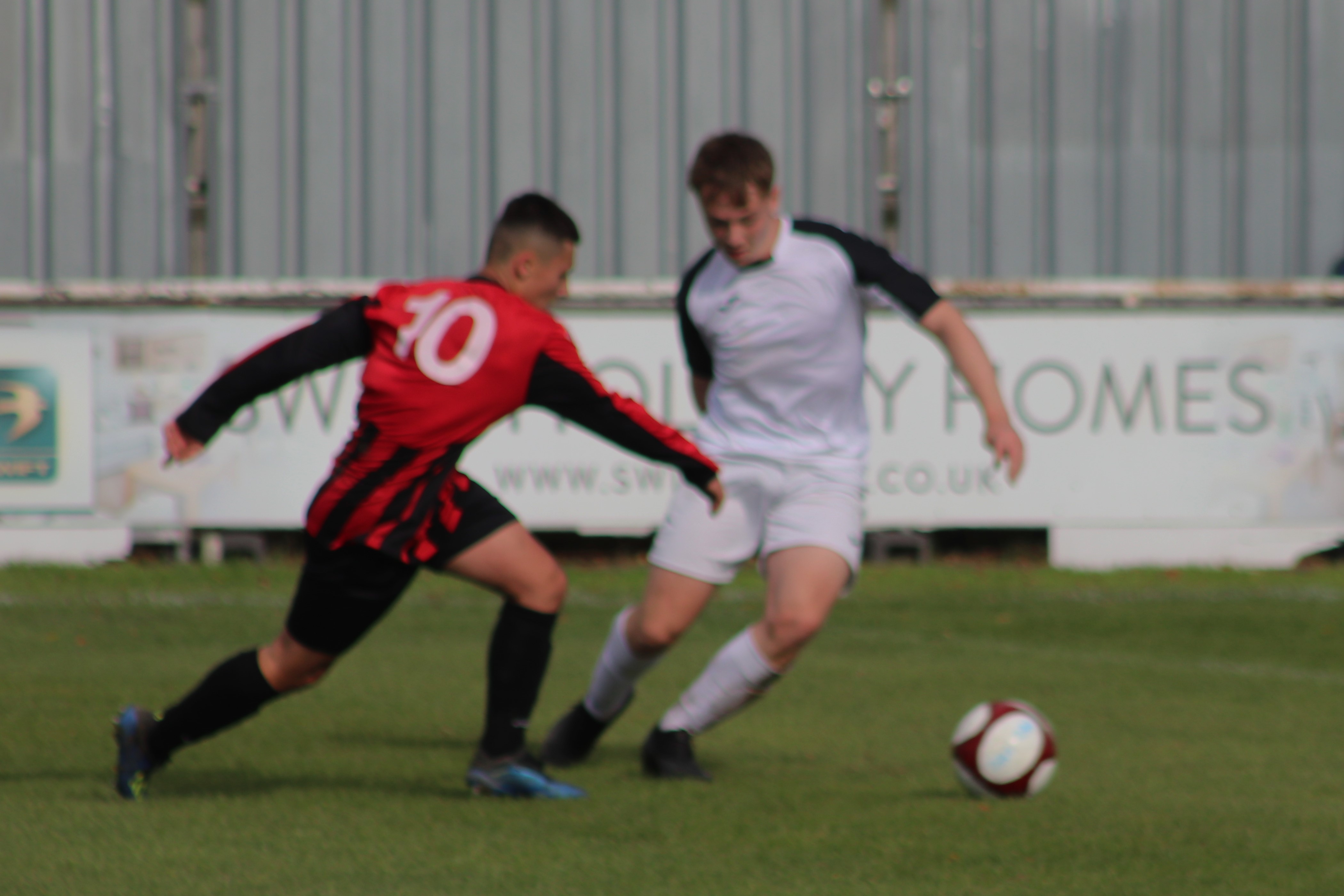 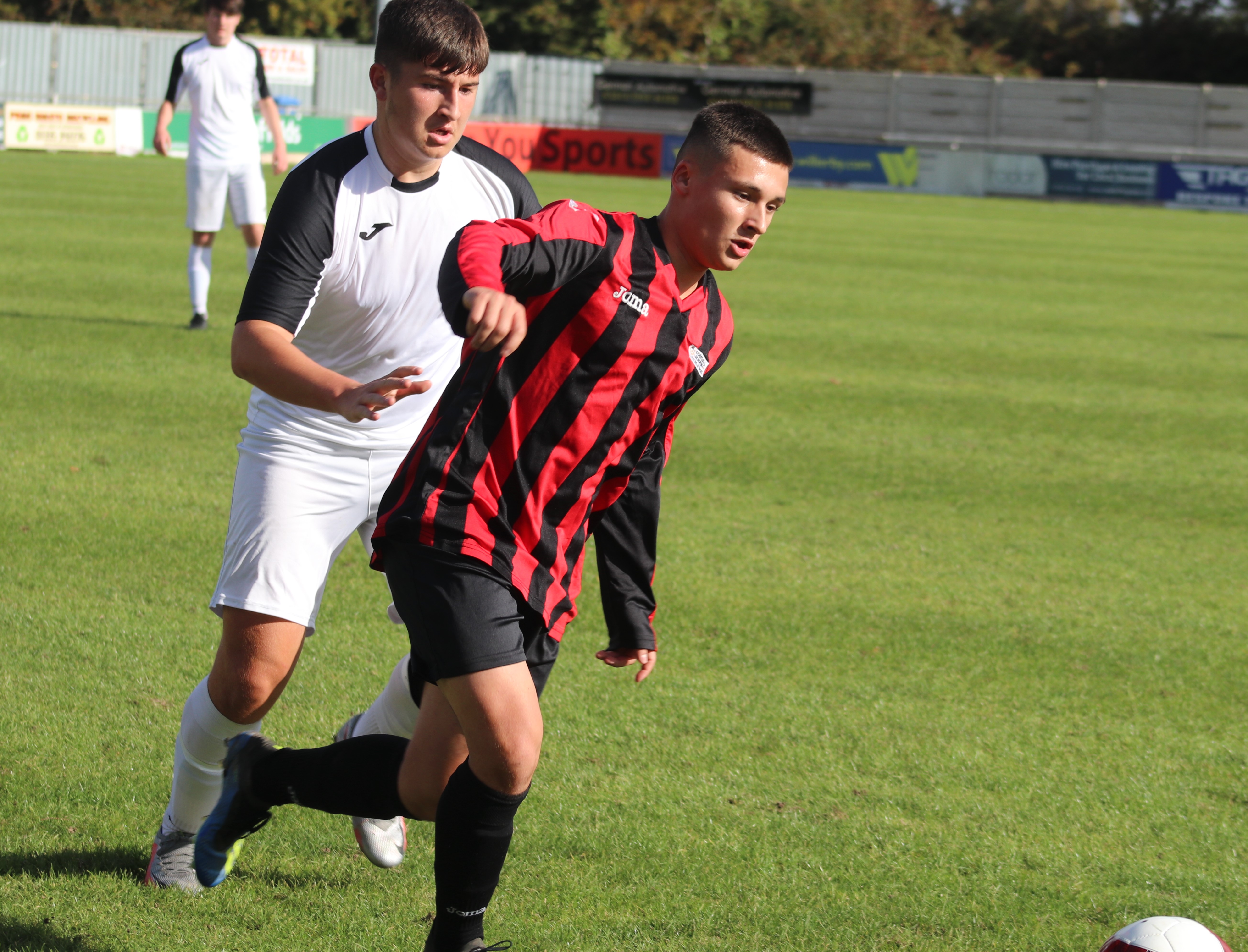 ACADEMY B TEAM GO DOWN 3-1
by Peter Scherer

It was a fairly frenetic but even start to the game, with Koecher putting a nice through ball for Mann and Smith to chase after five minutes, before Perry but a long pass ahead for Smith to chase down too, unfortunately just too long.

Stafford soon started to take charge and after eight minutes Bowen had to sprint from his goal to intercept a loose ball.

The visitors had had a close range shot blocked by Hughes, but after 10 minutes the Mickleover defence seemed to freeze and the Stafford number seven, cast Hamanga and Hughes aside, smashing the ball passed Bowen to take a 0-1 lead.

Two minutes later the visitors were blocked again before a shot was unleashed, only for Bowen to make another diving save shortly afterwards.

Mickleover were looking to build their confidence with short but accurate passing, and after 17 minutes Smith put a weak shot from a De Abreu pass.

Stafford were clearly looking to add to their tally, but an 18th minute attempt cleared the perimeter fence.

Mann had pushed forward for Sports, but was intercepted before a pass was made. Then Hamanga headed a dangerous Stafford cross way at the other end.

More shots reigned in on the Mickleover goal, fortunately most were off target, but it was a close call after Perry lost possession giving Stafford a free kick, with the follow up just wide of the post.

There were repeated corners too for Stafford, but Sports were just holding out. De Abreu then found Smith in space, for probably the best chance of the match so far, but the Stafford keeper came out quickly to block.

39 minutes it was 0-2 when Bowen was beaten on his right hand post, quickly followed by another shot into the side netting.

42 minutes and Bowen had to race off his line again to stop the Stafford number nine from making it three, only for the same player to smash another effort off the underside of the bar and away to safety as the half time whistle beckoned.

Sports started the second half with a promising move that saw De Abreu put a shot on target. But Bowen was soon seeing more of the ball than the Stafford defence, cutting off a promising attack after 57 minutes. He fumbled another first shot, but safely gathered a rebound as Stafford continued to threaten.

There was a chance for Sports with a 62nd minute free kick on the edge of the box, but Griffiths put the shot over the bar for a goal kick.

The tenacity of Stafford’s number nine almost got him through again, but his final effort ended in the side netting again.

It was somewhat against the run of play that Mickleover pulled one back after 65 minutes. As Smith received the ball the Stafford defence seemed to part and he was left with a clear shot on goal, which he accepted gladly for 1-2.

Hughes cut out another Stafford run before Nzeymana found Koecher, who put his shot over the bar.

Both sides continued to try random shots with few on target, but with the final whistle poised, Stafford’s number nine got the better of a duel with Hughes and slid it passed Bowen to consolidate their victory.

ACADEMY KICK OFF WITH A WIN
by Peter Scherer

Although Belper went straight into the attack from the kick off, the opening minutes were fairly even.

Lennon Higgins had a random shot which was well over the Belper bar, before the wing back sent a sixth minute through ball which Devon Smith just failed to connect with.

Belper kept coming back in surges and Berhard Koecher cleared the first real effort from the visitors, playing the ball nicely out of his own area.

Smith led another attack for Sports after 12 minutes, but weak ball into the area came to nothing. It was only two minutes later that Perry found the top right hand corner from outside the box, after a gradual multi-player build up to make it 1-0.

Belper had a fairly good chance to equalise four minutes later, with the Mickleover defence failing to intercept on a couple of occasions, but the Belper number eight’s shot was high and wide.

Mickleover keeper Fin Bowen had little of the ball as most of Belper’s attempts were very wide of the mark, whereas Mickleover went more for the gradual build up.

After 23 minutes Emilio De Abreu was in the clear, but the Belper keeper managed to block his shot and send it out for a corner.

On the half hour a Sports free kick was sent back into the box by Lennon, the ball bobbed around without either side collecting it, until Belper made another break which failed to reach its destination.

Smith though he had made it 2-0 after 32 minutes, but was flagged offside, but De Abreu the pout a good shot in from outside the area, just wide.

Perry and Smith the combined to put an effort just wide following a corner, before Belper’s number 11 managed to rebound his own first effort, only to shoot well wide again.

Smith was on the attack again with seven minutes left in the first half, his back header fell to Perry, who put in a weak shot which trickled to the Belper keeper.

There was one more slight chance for the visitors too, before half time, easily dealt with by Bowen.

There had been continuous substitutions from both sides, but it was Mickleover again, getting the first shot on goal in the second half, but Smith’s attempt was blocked.

But Belper’s number 11 was in space again, but failed to actually get a shot in, before Tom Griffiths put a god ball in the Belper box, just short of connecting with Lennon and Smith.

The visitors had a fierce shot blocked after 55 minutes, before Ethan Mann got clear, but his attempt was well wide of the target.

Smith broke through the Belper defence three minutes later, but fell at the final hurdle before getting his shot in and then Sam Allsopp had a shot saved.

But Perry made it 2-0 on the 20 minute mark, after Smith was chasing the ball and the Belper keeper went down injured.

Another fractional offside robbed Smith of another goal, but into the last 10 minutes Belper began to show more urgency and put the Mickleover defence under pressure.

Bowen had to palm away a close range shot, before Dylan Sanghera found Smith in the box for Sports, but his shot was saved. But Belper pulled one back when their number five beat Bowen on his near post with a header.

There were few more threats to the Sports defence before the final whistle went, but overall a good solid performance and a well earned three points.