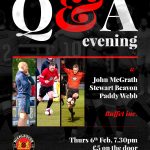 Mickleover Sports Club will be hosting a special Q&A Evening on Thursday 6th February, 7.30pm at the club.

On the night you will be able to fire your questions at:

Tickets are only £5 on the door and a buffet will be included. 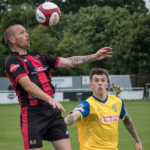 New player manager, John McGrath left Limerick for Aston Villa when he was 18 years old. After playing for both English league clubs and for the Republic of Ireland U-21 squad, he joined Mickleover Sports in 2015 and became the manager during the 2015-16 season.

I caught up with John during training for the team’s game against Warrington Town and asked him about his aspirations for the team and the demands of playing and managing a team at the same time.

The nature of modern football with a large earning potential means that young players can face serious pressure to succeed and I asked John about the challenge of managing younger players. “When I was a kid and getting into football, I’d be out from morning to tea time kicking a ball around but the structure and formal nature of academies and junior teams is so different now. Young players really need to be educated as to what football is really about and not just blinkered to the celebrity status that can come from playing professional football. I believe that more experienced players have a responsibility to nurture and encourage the younger members of a squad. I’ve been fortunate to have had great support at the clubs I played for. I had good mentors at Burton who gave me that much needed guidance and I now have the same important relationships with the team around me at Sports with experienced people like Steve Taylor. It’s not support from the manager but all the other people at a club like the kit man and the other faces you see regularly. You can’t perform to your best ability without a strong support network and I am attempting to develop and strengthen that network here at Sports.”

“We are assembling an ideal mix of player skills and experience here. We have a number of experienced professionals, some players who have played for several clubs and then the newer ones to watch who are coming through from the academy as well as other channels. I feel this team can develop well with the style of football we want to play rather than adopting the attitude of a minority of non-league teams to kick opponents and boot the ball up in the air. That is never going to get you anywhere.”

For a player who left home at a young age himself, it is clear that John values his first role as manager and mentor and wants to succeed. Like many experienced players, not playing football seems an alien concept and managing and coaching is often the route taken. “As a new manager you should always be both developing existing qualities and looking to acquire new skills so that you grow as an individual and have a squad that can adapt well to the changing nature of football. I like to view this as a process and I work to a timeline so that younger players will have an opportunity to step up when more experienced players move onto other clubs. We don’t want a revolving door here; we need a strong team that is able to react well to a changing environment. Our club has great ambition and it’s not just the players that are trying to make sure Mickleover Sports succeed; we have a great management team and a good volunteer base and we have big plans so we are aiming high.”