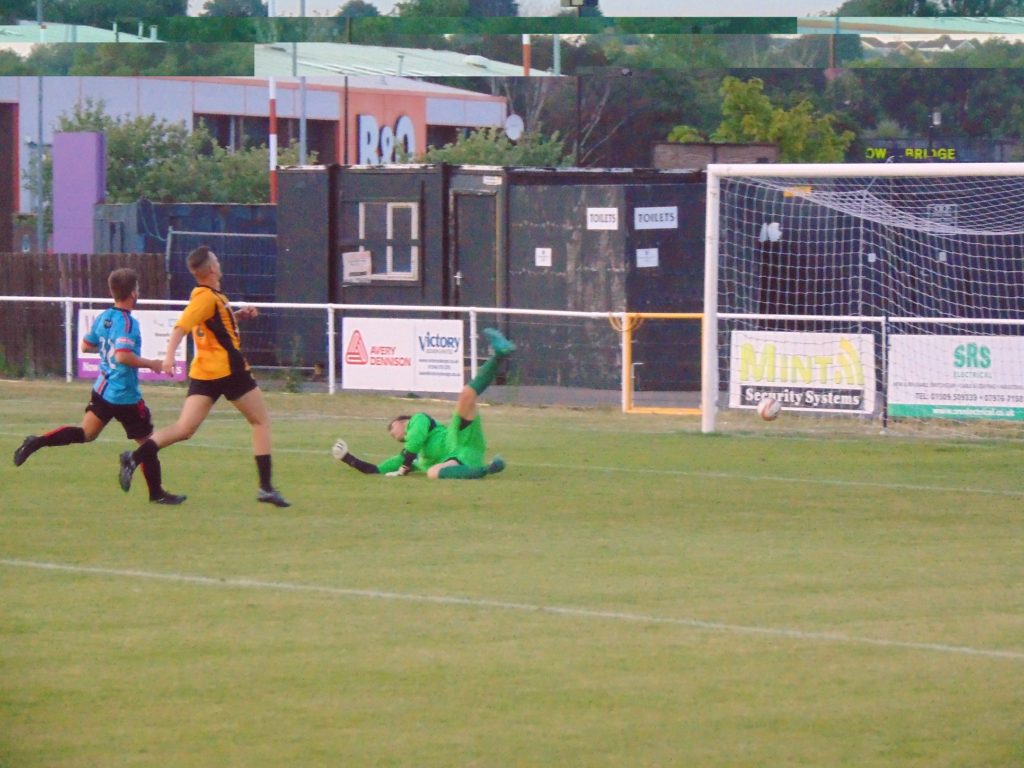 A really positive and professional display from Sports insured a third straight pre season victory over Handsworth Parramore. Goals from Trialist, John McGrath and Niall Doran insured an emphatic score line for the visitors. The Northern Counties East League side from Worksop certainly made Sports work for their victory and they certainly deserved at least a goal for their efforts, particularly in the second half. But Sports defence held firm and kept their second clean sheet in three games but more importantly a key chance to build match fitness ahead of the league campaign which is now only four weeks away.

John McGrath continued to use Lewis King in goal to start with a back four of Tyreece Robinson, Pablo Mills, Ben Turner and Trialist. The boss started himself alongside Curtis Burrows and Jack Walsh. Clinton Morrison started up top playing off the Trialist from the Netherlands.

It was Sports who kicked the game off and immediately within the first minute they had their first chance to score. Trialist made a darting run down the right hand side with his effort across goal forcing the keeper to make a save and put the ball out for a corner.  Handsworth’s first effort came a few minutes later as the No.11 struck a hard low drive at goal but it was blocked and cleared by Pablo Mills as the back. Good link up play between Morrison and Robinson down the right hand side sent the later away at pace but he couldn’t quite get the delivery right and it ended up for a throw in on the opposite side of the pitch. Sports were building up the intensity and after two efforts from Jack Walsh and Pablo Mills were saved by the Parramore keeper, the away side took the lead a minute or so later. A real error of judgement from the Parramore keeper saw him play the ball from inside the box directly into path of the Dutch Trialist. Trialist although given a gift from the keeper still had to put it away and he made it look easy as he skilfully rounded the keeper and placed the ball neatly into the net to give Sports the lead.

New signing Curtis Burrows had the next chance for Sports as his powerful header from an excellent cross in was tipped narrowly round the post by the Parramore keeper, determined to make up for his earlier error. At the other end Jack Walsh produced a fine block from a Parramore effort from outside the box which looked on target round and over the goal for a corner. A few minutes later the Handsworth No.7 got onto the end of cross at the back post but his effort was well over the bar.

Boss John McGrath then had an excellent effort hit the bar. Good 1-2 play with Clinton Morrsion saw the Irishman strike an effort which curled round and hit the bar and bounced down but unfortunately not over the line and was cleared away. Then at the other end Pablo Mills went down injured after over stretching to clear the ball away from the Parramore No.9 after the striker was 1v1 with Lewis King but the excellent defending from Mills cleared the ball away from danger. Mills was able to continue after receiving treatment. The first half finished with Trialist being played again down the right hand side who then picked our Clinton Morrison but the experienced forwards effort was dinked just over the bar to end a really good half from a Sports point of view.

Within a couple of minutes Jimmy Phillips forced a great save from the Parramore keeper from a drive on the left hand side of the box. But it wouldn’t be long before Sports extended their lead. A free kick was given to Sports from about 25 yards outside the box. John McGrath stepped up and sent a fantastic curling effort over the wall and into the bottom right corner; such was the dip on the strike. Sports made their final change as Lewis King was given a rest and substituted for a Trialist keeper.  Another lovely Sports move caused problems for Parramore on the hour mark as Jimmy Phillips picked out Nathan Jarman on the right of the box who cut inside and, with the outside of his right foot, curled an effort narrowly wide of the left hand post, inches from going in.

Evan Garnett then got onto the end of a great cross over from John McGrath but the effort was headed over the bar. It was at this point the hosts starting piling on the pressure in search of a route back into the game. It got very scrappy on one Parramore attack as several blocks were made by Sports defenders to protect their goal before a shout for a penalty came and went as the No.9 went down in the box whilst taking a shot at goal but nothing from the referee who waved play on. Next came what hopefully was a sign of things to come as the newly formed partnership of Nathan Jarman and Evan Garnett linked up well with Garnett striking just wide of the right hand side post after a 1v1 with the keeper.  The Parramore No.15 who’d come on as a substitute then hit an effort over the bar with around 10 minutes to go.

Sports finally killed their Step 5 opponents and the game off on 82 minutes as a mix up in the Parramore back line saw Niall Doran break free and he showed excellent composure to place the ball under the diving keeper and into the bottom left corner of the goal. It was an excellent finish from a player who is already looking like an excellent signing from McGrath. There would be two more chances in the game with one for either side. Another breakaway saw Nathan Jarman curl an effort into the arms of the Parramore keeper. From the resulting re start the ball made its way up field and nearly resulted in a consolation goal for Handsworth but the No.7 put his effort well over the bar.

That brought an end to a successful pre season friendly for Sports. Three goals, a clean sheet and more minutes under the player’s belts can only be positives for McGrath’s Sports side. Of course pre season results mean nothing in the long term would you would prefer to win them all than lose them all.

Mickleover Sports will now train on Thursday and Saturday before returning to match action on Tuesday 24th July when they will play Step 4 side Frickley Athletic away, 7:30pm Kick Off.