Last night’s visit to Leek Town in the first qualifying round of the FA Cup, saw Mickleover fight back from an early goal, to return home 2-1 winners.

There were a few changes from the side that visited South Shields last Saturday. But manager John McGrath went for:

In the opening minute of the game Mickleover had a free kick after Bacon was fouled. Warren’s kick bounced back into Wright’s path, who sent a thundering shot over the bar.

Five minutes in and Leek’s Will Saxon  broke through Sports defence, but his shot was straight at keeper Slinn, followed by a Leek corner, again easily taken by Sports keeper.

Morris started to become a key player with his overlapping runs down the left and he was able to put a cross in from a Beavon pass on seven minutes, but too close to Danny Roberts in the Leek goal.

But the combination of Leek’s Matt Bell and Short picked up a midfield interception, leaving Bell with good chance to open the scoring, right in front of the Sports goal, but put it wide. 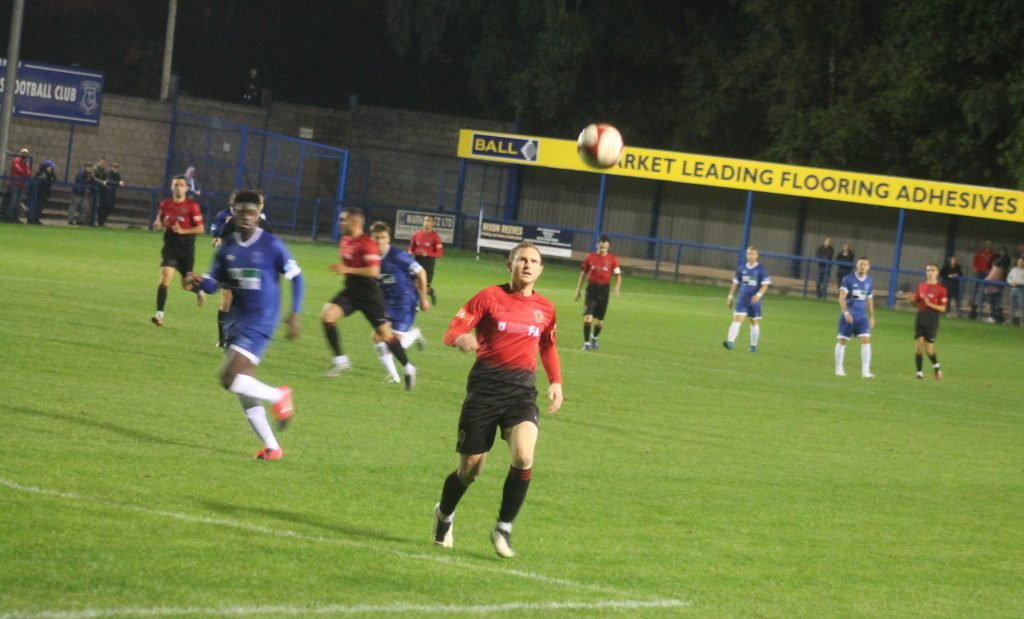 Five minutes later Webb had a half chance, but his shot didn’t have the power to trouble Roberts. It was soon followed by a flurry of activity, when Bacon put Beavon through on the left, his shot was put out for a corner, which was taken by Wright and headed out again.

Although Mickleover had looked the likeliest to open the scoring, it was Leek’s Short that did. James Kirby had a header, which Slinn seemed to have caught, until he lost balance, dropped the ball and Short was on hand to make it 1-0 to the home side.

Warren drove the midfield forward again, leading by example, and curled a ball just over the bar, before Morris put another cross into the box, with no one there to receive it.

Mickleover were doing most of the attacking, but Leek continued to look dangerous on the break.

After 25 minutes Morris connected with Beavon, but unable to get the power into his shot, it was easily taken by Roberts.

But the equaliser finally came in the 26th minute, when Webb’s corner found Verma, whose blocked shot fell into Beavon’s path, burying it in the bottom right hand corner 1-1. 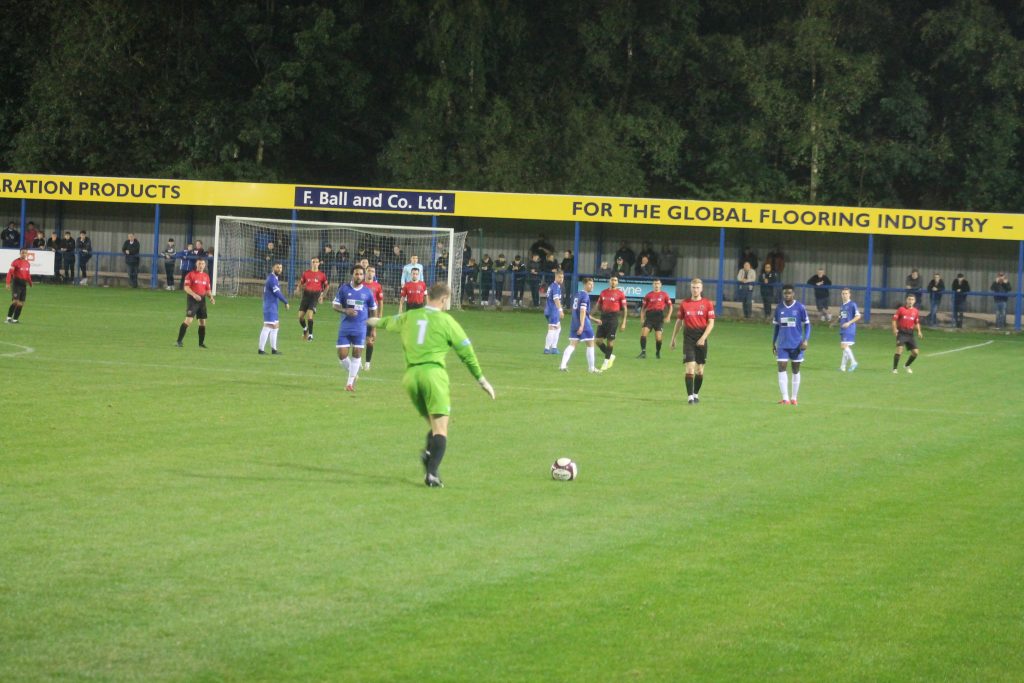 Only a couple of minutes later Beavon put Bacon through, but his shot was just over the bar.

But Leek were still dangerous on the break after Warren was dispossessed and Short got a shot in on target, well saved by Slinn.  Two minutes later Short broke through again, with a shot just wide from outside the area.

Mickleover continued to favour the interpassing and slow build up, which resulted in another hard shot just wide from Wright.

Short had another shot saved for Leek, before Saxon connected with the rebound, with his effort palmed out for a corner by Slinn.

Mickleover had one more chance before the half time whistle, when Beavon turned in the area, pushed the ball back to Verma, whose shot was saved.

The second half had barely started when Webb went to collect a Morris cross and was brought down in the area, but the referee waved away any penalty appeals.

It was wasn’t long though before Mickleover found the back of the net, with what proved to be the decisive goal. 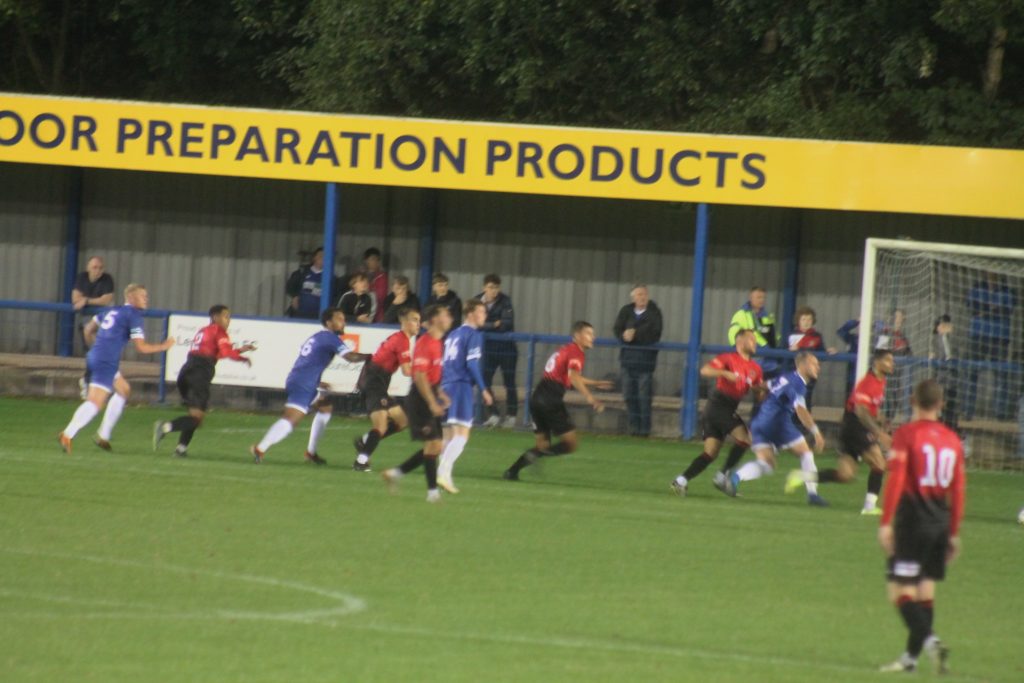 A piercing ball from midfield split the Leek defence wide open, and Bacon was on the receiving end to make it 2-1.

Leek’s immediate response was thwarted when Wright was fouled on the half way line. There was no free kick but Beavon went clear, with a following cross from Bennett into an empty area.

Webb had a couple of penalty area duels with the Leek defence, before Beavon linked up with Wright on 55 minutes, who’s pass found Verma. The resultant overhead kick, cleared the bar and the stand.

On the hour Walshaw came on for Webb, before another break from Morris found no one to receive it.

As Sports began to dominate, Slinn tried more long clearance’s, finding Beavon, who passed to Wright with the shot going for another corner.

Wright had another attempt blocked after giving Leek’s Olly Harrison a hard time, but shortly afterwards Walshaw became the second Mickleover sub for Beavon, soon followed by Gowing for Wright.

In the final 15 minutes Leek had a header just over the bar from a free kick, but Butler and Watt had looked solid all night and Watt almost added to the scoreline, with a header tipped over from a Warren corner.

A solid defence, with both Bennett and Morris effective on the overlap, added to a strong and motivational midfield, giving the strikers good service and a successful all round team victory.

Now we look forward to the draw for the next round.