Table toppers Mickleover FC were finally back in NPL action after a six weeks gap, but despite the 4-1 win against Radcliffe, it was the referee that became the main talking point.

There were two changes from the team that went down to Hitchin in the FA Trophy, as Paddy Webb was back in to lead the attack and there was a start too for Ben Gowing, as captain Mason Warren was missing.

Radcliffe had the first attack of the game with Akpa-Akpo getting an early shot on goal, following up with another attempt just wide after three minutes, as Mickleover had some difficulty clearing their lines.

Milner had an early shot just over the bar, before Gowing found his header blocked after seven minutes, earning a corner.

There seemed to be an excessive amount of throws and free-kicks in Radcliffe’s favour, which kept the Mickleover defence busy. 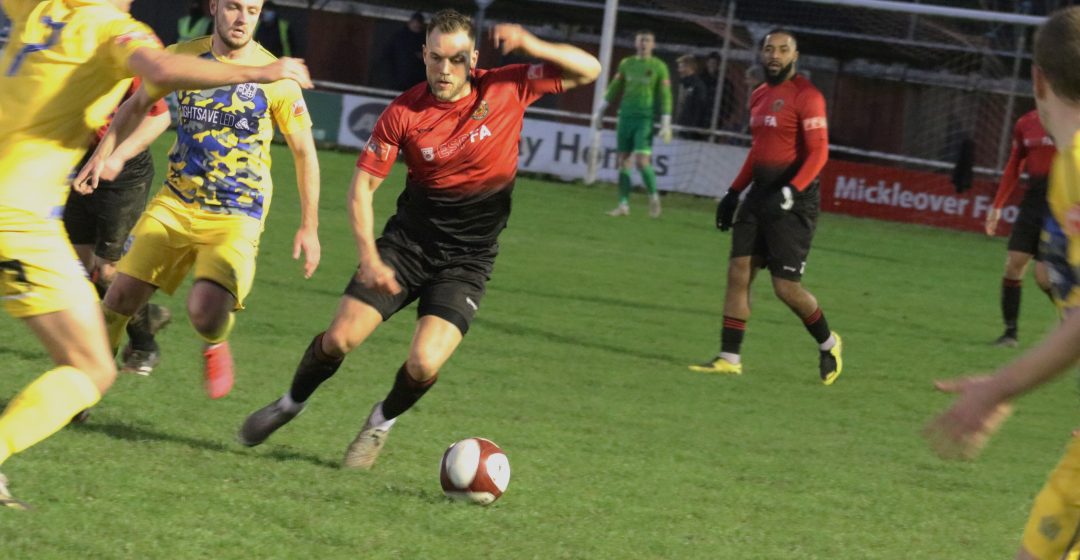 But once the home side got a break they began to look increasingly dangerous and in the 16th minute a Milner run gave Webb a chance to break, resulting in a free kick after being elbowed aside by Radcliffe’s Thornley.

Beavon then latched onto a clearance from a failed Radcliffe attack too, outstripped the defenders and shot just wide.

The attacks were coming thick and fast and a long overlap from Bennett took him into the Radcliffe area, before his attempt to shoot was finally blocked.

A few minutes later Milner was first in the referee’s book after catching a Radcliffe player’s ankle from behind.

But it was after a 27th minute free kick was earned when Beavon was hauled back just outside the box by Thornley. There was no booking from the inconsistent official, but Agustien’s free kick caused consternation in the Radcliffe box. The initial kick nearly found its way into the net, but as it came back out Watt was on hand to head it home 1-0.

Beavon was next on the charge, but was taken down by Swaby-Neavin just outside the box, but Radcliffe had a chance of an equaliser after 35 minutes, when Navarro went close.

Lenighan was the first Radcliffe player in the book after taking Agustien’s legs in a horrendous two footed tackle from behind.

But it could easily have been two for Mickleover after 41 minutes, when some good interplay between Milner and Webb, saw the latter fire just over the bar. 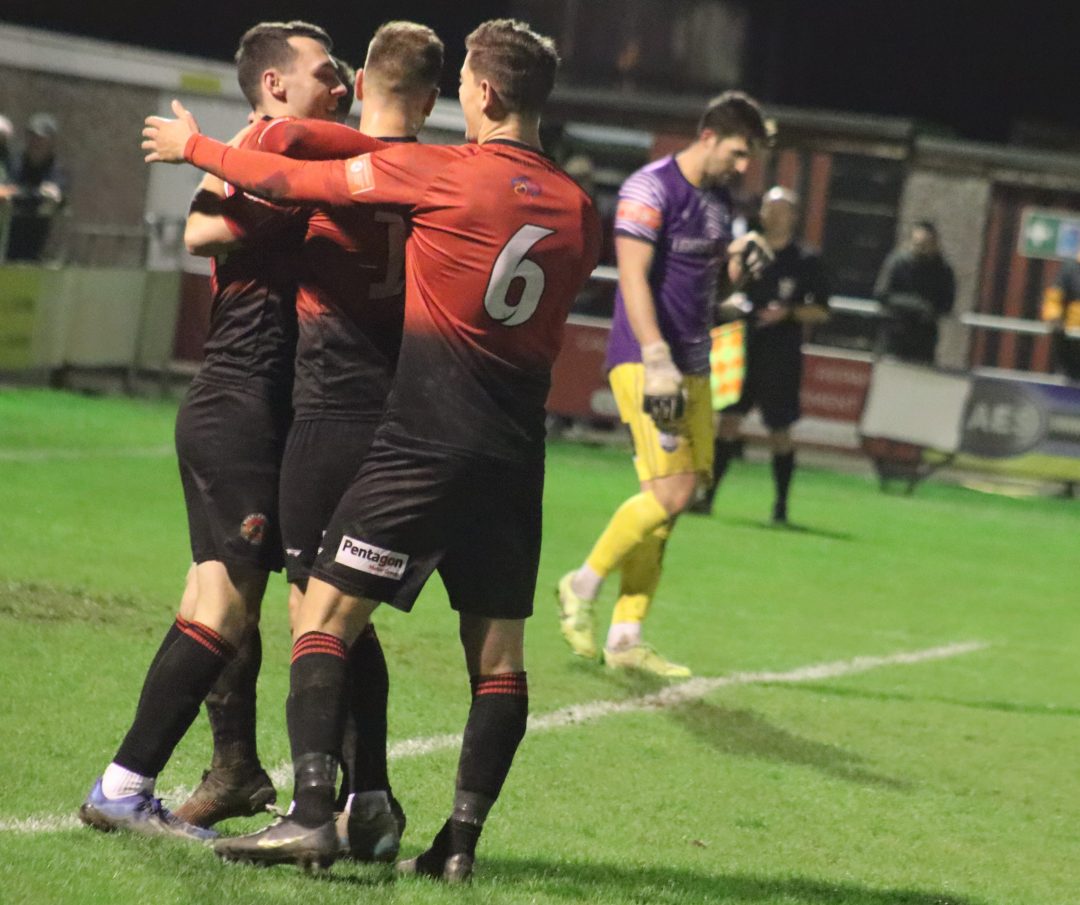 So at half time it was 1-0 and one each in the referee’s book.

The second half started with some early pressure from the Sports attack. Beavon was fouled again just outside the box after 49 minutes, with Agustien’s free kick bouncing off the wall, before Gowing’s shot on the rebound was blocked.

But after 50 minutes the referee was probably the only person in the ground that thought that striker Owens hitting the deck unchallenged after running into Morris, actually deemed a penalty.

Owens put the penalty passed Hawkins, before the referee added to his Christmas list with more yellow cards.

The anger at such a ridiculous decision, which the ref’s assistant had seen clearly but refused to intervene, played with havoc with the Mickleover game plan, and for a while they were under serious threat.

But the book was out again when Hawkins, who was kicked on the back of his leg by a Radcliffe striker and found himself on the refs growing list too for protesting.

With an hour gone it was yellow cards eight and 1-1 on goals, a sad indictment on a scrappy game. When Beavon was fouled there was no free kick, minutes later Butler was in the book for a less aggressive tackle right in front of the same linesman, who had failed to intervene on the farcical penalty decision too.

Returnee Bacon came on for Webb and the game had briefly settled down until Lenighan picked up his second yellow card for a foul on Milner and was heading home early.

In the 75th minute Mickleover finally broke the deadlock, when Bacon collected the ball midway into the visitors half, picked his spot and fired a cracking shot into the bottom left hand corner, 2-1.

But having tired of yellow cards the ref added to his red collection, when Milner joined Lenighan in the dressing room, despite having clearly pulled out of the offending challenge. 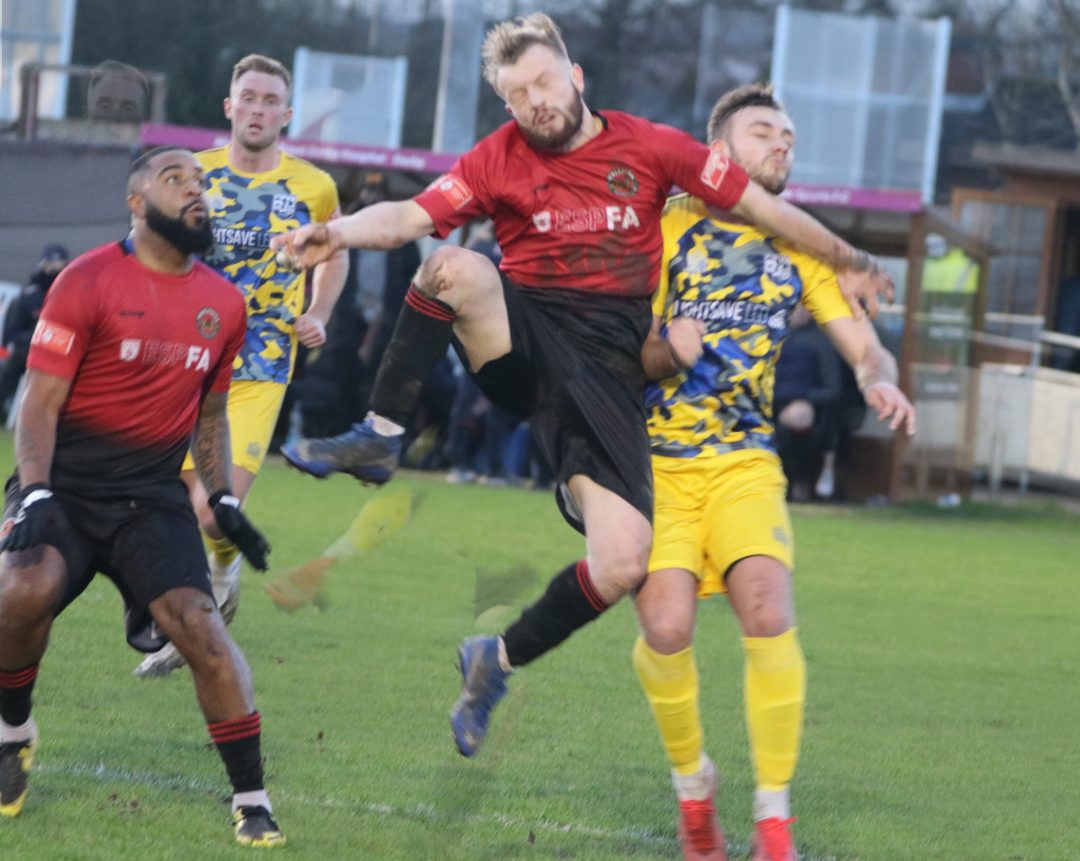 With Verma on for Agustien, skipper Wright continued to drive his men forward and with Bennett and Morris still working well on the overlap and Butler and Watt solid in the middle.

It was one of Bennett’s run that took him into the area with three minutes of normal time left. He was tripped in the box and Wright safely tucked away the following penalty 3-1.

It was into time added on that Bacon then found himself with the ball in the box unmarked. Radcliffe keeper Belford tried to tackle him, but the resulting push and trip not only earned another penalty but sent Belford back to the dressing room too.

Owens donned the keeper’s shirt to face Bacon’s penalty, but it was 4-1 to Mickleover as the final whistle soon followed.

Although it was a good home win, nine yellow cards and two reds for our visitors and one red and a handful of yellows for Sports bore more of a reflection on the official’s incompetence than any real malice from either side.