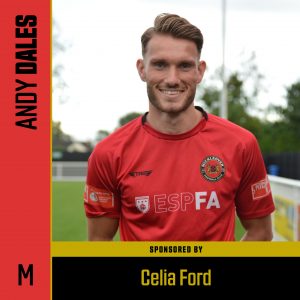 It’s been more of a return home for Andy since rejoining Mickleover just before the season started. Derby born he spent 10 years at Derby County and was a first year pro in 2013. He was released in 2014 and was unable to take up offers of trials due to injury, which brought him to Mickleover for the first time. The pacey winger had four years at the Don Amott Arena and was part of the team that won promotion back to the NPL Premier Division, his first senior medal.

In 2017/18 he scored 23 goals and was signed by Scunthorpe United after being spotted at the Jamie Vardy Academy. During his three years there he made 33 appearances and scored one goal, but also had long loan spells in the Scottish Premiership with Dundee and Hamilton Academicals. After a short spell at Altrincham last season, he was released and returned to Mickleover, hitting two goals on his home debut against Gainsborough.