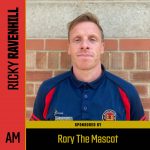 Mickleover Assistant Manager Ricky Ravenhill has been at the Don Amott Arena since 2018 after enjoying a playing career with clubs such as Doncaster Rovers, Grimsby, Notts county and Bradford City. It was with the latter that Ricky was part of the squad that reached the 2013 League Cup Final and tasted Wembley success by winning the League 2 play-off final. Now part of John’s coaching team, Ricky is looking for further success with the boys from Station Road.