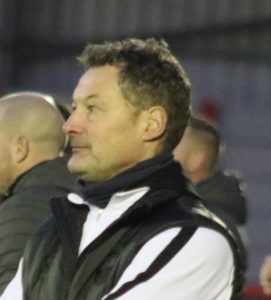 Having recently returned to the club as assistant first team coach, Paul brings a vast amount of footballing knowledge and experience with him from a long and successful career.

Derby born he joined Burton Albion from Belper Town and went to Wembley with the Brewers in the FA Trophy final.

After a spell at Leicester City and a loan at Lincoln, he spent two years at Blackpool, before joining Grimsby Town for the first time.

After a spell at West Bromwich Albion he returned to Grimsby and went to Wembley again, winning the Football League Trophy and play-off final.

He played almost 460 games for Grimsby, captained them and had his first taste of management, before finally leaving in 2004.

Scunthorpe, York City and Stafford were his next stops, taking on the role of player manager at Stafford, where his playing career ended.

He was on Portsmouth’s coaching staff and was briefly caretaker manager as well as being assistant to Harry Redknapp. Having worked with Avram Grant too, he joined him at West Ham.

He was manager at Bournemouth and valued member of the coaching staff, before assisting Steve Cotterill, Redknapp and Lee Carsley at Birmingham.

Moving on to Chennaiyan in India as John Gregory’s assistant, he then went to Israel with Maccabi Haifa, before returning to the UK in December 2020 to manage National League North Gloucester City.