During the 1930s Corby was represented in the United Counties League by steelworks side Stewarts & Lloyds. But by the 1948 it was decided that the expanding town could support an independent football club and Corby Town was formed. Their nickname of the Steelmen derives from the link with Stewarts & Lloyds.

Corby Town played their first game in August 1948 at Occupation Road, which was to be their home until 1985. They won the United Counties League championship in both 1950–51 and 1951–52, and these successes prompted a step up the Midland Football League in 1952. The Steelmen spent five seasons in the Midland League before switching to the Southern League. They were promoted to the League’s top division in 1965 and making several applications for Football League membership without success.

Corby were relegated from the Premier Division in 1968 and remained in various forms of Division One until league re-organisation in 1982 saw them placed in the new-look Premier Division. The Steelmen were relegated again in 1990 – by which time they had moved to a new home at the multi-purpose Rockingham Triangle sports complex and for the remainder of the 90s the club struggled to stay in the Southern League. 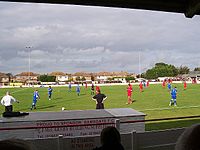 Since 2002, however, the club’s fortunes have turned around, culminating in a return to the Southern League Premier Division in 2006 following a fantastic season with Rob Dunion at the helm. Following a tough year back in the Premier Division that saw the departure of both Dunion and his successor Dougie Keast, the club were saved from relegation by Farnborough Town’s demise from the Conference South. 2007–08 looked really positive for The Steelmen, with a new board led by ex-Kettering Town Chairman Peter Mallinger, Mick Leech & Les Manning of Corby based construction company Weldon Plant, as well as former Kettering director Dave Dunham. However the side assembled by Kevin Wilson vastly underachieved and following his sacking by the club and an influx of new players by new manager Graham Drury, The Steelmen avoided relegation with just one week of the season remaining. Following a number of new signings and complete team restructuring the Steelmen, promotion to the Conference North was achieved on 25 April 2009, at the Rockingham Triangle in front of a strong crowd of 1,990. The record gate at the Triangle was set in a pre-season game with Rangers with 2,300 supporters present. The record at Occupation Road was 10,239 against Peterborough United.

In May 2012, manager Graham Drury left the club, after the board decided not to offer him a new contract. He was replaced by former Northampton Town manager Ian Sampson a few weeks later. However after five straight defeat at the start of the 2012–13 season Ian Sampson resigned as manager and former QPR and Peterborough United defender Chris Plummer took charge.[1]However, after four seasons in the Conference North, they were relegated on the final day of the season.

Just two games into the 2013–14 season Chris Plummer resigned[2] as manager of Corby Town, following defeats to Hemel Hempstead Town (6–0) and Burnham (3–0). Plummer’s assistant Mark Peters was placed in interim charge of the first team on 21 August 2013. Despite Peters steadying the ship with 3 wins and a draw from his 5 games in charge on 9 September Chairman Kevin Ingram made the surprise announcement that a managerial duo, Andrew Wilson and Tommy Wright, would take charge of the Steelmen. They made a dream start to life at Steel Park with a 3–0 home win over Barwell in the FA Cup.

Off field issues led to financial problems and at the end of the 2013–14 season Kevin Ingram handed over control of the club to a consortium of local Corby businessmen. This new consortium decided they could not continue with a team management partnership and appointed Tommy Wright as sole manager with David Clarke as assistant manager. Corby born Paul Malone was made team captain by Tommy Wright and the new consortium pushed forward with their ambition to nurture local player talent such as 18-year-old Connor Kennedy who claimed his position on merit.

Season 2014–15 led to increased fan support at Steel Park with an average attendance of over 400 (November 2014), the second highest in their league at that time.