Although football had been played in the village for at least 20 years previously, the earliest known reference to Rushall Olympic Football Club is in local newspaper reports on matches from the 1893–94 season. The club joined the Cannock & District League in 1895, finishing as runners-up in their first season and later joined the Junior (where they were champions in 1903–04), Amateur, Parks and Senior sections of the Walsall & District League.

During the inter-war years the team won a number of local honours. At this time the team comprised mainly local colliery workers and played on a field behind the Miners Arms pub in Rushall and changed in the pub itself. However, some time prior to World War II the club disbanded. 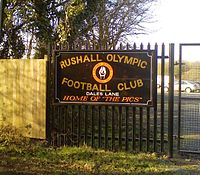 Dales Lane, home of the Pics

In 1951, a group of local young men decided to reform the club. They approached the proprietor of a local fish and chip shop for permission to use his premises as their headquarters and secured the use of Rowley Place as a home ground. The club joined the Walsall & District Amateur League, where the team won the Second Division championship in 1952–53, and later the First Division championship in 1955–56, after which they gained promotion to the Staffordshire County League (South) where they won the Second Division title at the first attempt.

Following promotion to the First Division, the club won four championship titles between 1960 and 1965. In 1975, in a bid to gain a higher league status, the club decided to move three miles away to the Aston University Sports Ground, just off the main A34 Walsall to Birmingham road. Meanwhile, the club obtained the lease on some land in Daw End, Rushall, and the new Dales Lane ground was officially opened on Sunday 14 August 1977.

The club were accepted into the West Midlands (Regional) League in 1978, and won the First Division title in 1980. The club enjoyed fourteen seasons of moderate success in the Premier Division, with a highest finish of fifth place achieved in season 1988–89. In 1994 the Pics became founder members of the new Midland Football Alliance. Although the late 90s brought only mid-table performances in the league, the Pics did defeat the then Southern League club Rocester at the Bescot Stadium, home of Walsall in a penalty shoot-out to lift the Walsall Senior Cup in 2000.

After finishing in second place in both 2000–01 and 2002–03, the Pics finally claimed the league title in 2004–05 and with it promotion to the Southern League Division One West. They were then transferred to the Southern League Division One Midlands for the 2006–07 season where they stayed for two years, qualifying for the playoffs in their last season by finishing 5th.

Due to the restructuring of Northern Premier League Division One, they were transferred yet again to the NPL Division One South for the 2008–09 season where they again finished 5th and qualified for the playoffs. They were also unsuccessful in achieving promotion this time. Manager Paul Holleran then left the club to be replaced by Neil Kitching who started his first season brightly before tailing off to finish in mid-table and lost in the final of the Walsall Senior Cup.

Despite further budget restriction Kitching supported by a restructured support and relatively youthful support team including Nick Amos and Ian Cooper, they went on to finish 3rd in the 2010–11season and reached the playoff final, beating Brigg Town 3–0 in the semi final. A 2–0 victory over Grantham Town in the final saw Rushall Olympic to reach Northern Premier League Premier Division and Step three football for the first time.

The first season at this higher level saw Rushall Olympic finish 8th in the league. They reached the final of three cup competitions; the league cup (where they lost to North Ferriby United after extra time), the Staffordshire Senior Cup (where they lost to Kidsgrove Athletic) and the Walsall Senior Cup which they retained. Rushall also equalled their best ever performance in the FA Cup reaching the fourth qualifying round where they suffered a defeat at the hands of Stourbridge.

In 2012–13 Rushall made their debut in the first round proper of the FA Trophy having qualified with victories over Woodford United, Chasetown and Droylsden. Their reward was a trip to Wrexham where they suffered a defeat against a team that went on to win the final of the competition. In the League Rushall again were on the verge of the play offs finishing in 6th position but failed to make the end of season competition.[2]

In 2013–14 Rushall Olympic made the 4th Qualifying Round of the FA Cup before losing out at Grimsby Town. Rushall eventually finished in 7th place in the league narrowly missing out on the play offs. However, there were two cup final appearances. The Pics lost out in the final of the Walsall Senior Cup but won the Staffordshire Senior Cup beating Port Vale at Vale Park by two goals to one.

At the end of the season the club amicably parted company with manager of five years Neil Kitching. His assistant Nick Amos also left the club on the best of terms. Rushall soon moved to appoint former West Bromwich Albion and Bolton Wanderers midfielder Richard Sneekes as manager with Steve Hinks as his assistant.[3]