The Club had its genesis in a team of players brought together by the teachers of the Skelmersdale Wesleyan Day School and it was called Skelmersdale Young Rovers, the headmaster at the time being Mr Ritson. When he left he was succeeded by Mr Forster of St Helens, a real football enthusiast. Under his guidance the team became a much stronger organisation and the name was changed to Skelmersdale Wesleyans, subsequently the minister expressed his disapproval of this and the team became Skelmersdale United. Nearly 10 years after their formation United joined the newly created Lancashire Combination in 1891-92 Skelmersdale was a small mining community with a population of a little over 5,000 and they were paired up with the reserve sides of clubs that were in the top flight of English football, Blackburn Rovers, Bolton Wanderers and Preston North End. The club won its first major trophy in 1908 when they defeated Portsmouth Rovers in the final of the Lancashire Junior Shield They joined the Liverpool County Combination in 1909 and won the first of their Championship titles in 1911 they competed in the League until 1955, during which time hey were Champions on 10 occasions, Liverpool County FA Challenge Cup Winners on 8 occasions and George Mahan Cup Winners 5 times. For the majority of their first seventy years the club played at Sandy Lane that is now the site of an office block. Tom Tinsley who played for just four seasons (either side of the war) created a record by scoring 214 goals this despite many games missed due to Army call ups.

For the 1955-56 season the club moved into the 2nd Division of the Lancashire Combination, and in their 1st season they lifted the Championship. and also found a new home White Moss Park.

A new team for a new town

Skelmersdale became a designated new town in 1961 and ushered in a whole new era for the area. Coincidentally, around the same time, in August 1961, Wesley Bridge was made Secretary/Manager of United and began the radical restructuring the club. In 1966–67 the changes began to pay dividends on the pitch. The FA Amateur Cup quarter final victory against Slough Town was a record gate for Whitemoss Park (Sandy Lane) – 7,500 – in March 1967. That year United won their way to the FA Amateur Cup Final at Wembley in front of 75,000 spectators (which, at the time, was the biggest Wembley attendance for any game other than an FA Cup Final, League Cup or International game). A nil-nil draw with Enfield resulted in a replay at Maine Road, Manchester. Whilst United lost 3–0, the whole experience was the basis of an extraordinarily successful period in their history. The following season United lost away to football league club Scunthorpe United in the first round proper of the FA Cup. In 1968–69 United again qualified for the FA Cup first round only to lose away to football league club Chesterfield. The same season, after transferring from the down-graded Lancs Combination to the Cheshire County League, United won the league championship, a feat they would repeat the following year. The club also got through to the semi finals of the FA Amateur Cup, another feat that they would repeat the next year. In 1970–71 United finally won the FA Amateur Cup in a 4–1 thrashing of Dagenhamat Wembley. Despite only finishing third in the Cheshire County League, United also secured promotion to the Northern Premier League, the highest level the club had ever played at. In 1971–72 United qualified again for the first round proper of the FA Cup where they were beaten at home by football league club Tranmere Rovers. They finished in the top half of the Northern Premier League.

By 1976 United had dropped into the Lancashire Combination. In 1982, when the Combination was amalgamated with the Cheshire County League to form the North West Counties League(NWCL), United found themselves in Division Two of the NWCL. The club reached the inaugural League Challenge Cup Final, only losing in a replay to Darwen. In 1987 the NWCL was restructured when a large number of clubs left to join the Northern Premier. This restructuring saw the club move up to the NWCL First Division. United struggled for three seasons before being relegated. 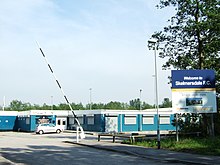 Russ Perkins was named as Manager and the club quickly regained promotion and the start of the long road back to the clubs former glories. winning the League Challenge Trophy in May 2000, The club left their spiritual home of White Moss Park in 2002 and eventually moved to the newly named Westgate Interactive Stadium Stuart Rudd smashed the goalscoring record netting 230 goals With Paul Gallagher in charge he took the club forward and with a second-place finish and promotion to the Northern Premier League in 2006.

United appointed the experience manager Tommy Lawson to take the club to the new level and apart from a mid table position in 06-07 the club finished in a play-off position all but once in the next 5 seasons, In 2008, Skelmersdale United finished third in the inaugural season of the Northern Premier League Division One North. They were only 4 points off the top spot and won the semi final of the playoffs against Curson Ashton 3-1. The final was against FC United. Despite scoring first in front of 4000 fans at Bury FCs ground, they lost 4-1. The 2009 season saw Skelmersdale finish 2nd by 1 point and lose in the semi finals of the playoffs to Newcastle Blue Star 1-0. Both teams that were promoted that season went into administration in the off-season. The 2010 season saw Skem finish in 5th place and lose in the semi final of the playoffs 2-0 to Lancaster city. In the 2011 season Skelmersdale again finished in 2nd place to Chester. They were on the same points but were placed second on goal difference. The final day of fixtures saw Skem needing to win by 7 clear goals and for Chester to lose. Chester did in fact lose to the bottom team, but skem only won their game 7-2, so missed out on promotion by 2 goals. Their misery was completed by losing in the semi finals yet again to AFC Fylde 1-0. The 2012 season saw Skem finish outside the playoffs for the first time in 7th place. Skelmersdale continued to improve under manager Tommy Lawson. In the 2013 season they finished top of the league, being promoted to the Northern Premier League Premier Division which sits under the conference and is level 7 in the National League system. They won it by a 16-point margin from second place, scoring 110 goals in the league alone that season. This is their highest position in non-league football ‘pyramid’ to date.(see the National League System).

On 5 March 2011, Skelmersdale entertained Chester in an Northern Premier League Division One North fixture and broke the attendance record for The Skelmersdale & Ormskirk College Stadium when 1,171 attended, it had previously been 1,002 for an FA Cup tie in 2004 against Burscough. winning the title in record breaking style in 2012-13. They also won the Lancashire Cup in 2010. Despite challenging for the title in their first season in the NPL Premier the club lost ground and eventually finished 6th.. After a good start to the 2014-15 season, the club lead the table until after the Christmas period but United found themselves in a serious financial problems and only by the efforts of the players supporters and sponsors the club managed to see the season through. The season however ended on a high as victories over Champions FC United and a Liverpool Senior Cup win offered the club optimism for the current campaign.