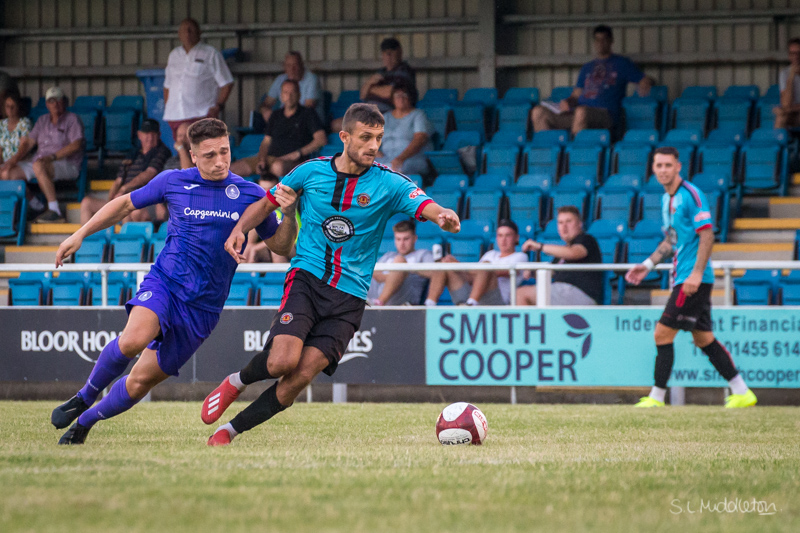 On a beautiful summer’s evening, Sports’ bounce back from a 2-0 loss to Telford on Tuesday night with a 2-0 win against Burton Albion XI last night (Weds 24th July).

MICKLEOVER Sports took home the KC Trophy with a 2-0 victory over a young Burton Albion XI at the Don Amott Arena thanks to first half goals from Nathan Modeste and Jack Smith.

Sports grabbed the lead after just two minutes when the imposing figure of their triallist, wearing the number eleven shirt, got up well to meet a cross and head it into the path of MODESTE who made no mistake from eight yards.

Albion’s young guns were playing some nice passing football and triallist linked up well with Ethan Vale before finding Jack Holmes on the right, his low cross, inadvertently deflected behind by Sports Tom Eccleshall.

Sports almost doubled their lead on 25 minutes when a direct ball over the top picked out the run of Jack Smith but Callum Hawkins was smartly off his line to block with his leg. And the young Brewers keeper was quickly out to block Modeste at close quarters as the striker showed good pace to get away from Rueben Lal.

Three minutes before the break it was the home side who got the vital goal to give them a 2-0 advantage when SMITH rose to powerfully head home a corner.

Albion made two changes for the second half with Jack Livesey taking over in goal from Callum Hawkins and Ben McClean coming on for Ben Hart who played a significant role in Tuesday’s game at Solihull as well.

And a third change saw Ben Radcliffe replace Luke Redfern at right back eight minutes after the restart. The fresh legs of Albion were certainly seeing more of the ball and both Manny Shittu and Yewo Nyirenda added more pace and power in the attacking areas. Young defender McClean did superbly well to slide in and make a timely challenge on Sports substitute striker Tomas Junek as he looked to get a shot away and Livesey’s goal was under threat again when James Cadman got away a sharp strike that just went wide of the post.

Livesey was forced into meaningful action moments later when Cadman again found himself in space with room to shoot and the young Scot spread himself well to block the shot at fairly close quarters.
Shittu went closest to getting Albion back into the game with a effort from range that the Mickleover keeper could only push against his own crossbar with nobody in a yellow shirt able to make ground into the penalty area to capitalise on the rebound.

Adam Prusa went close to adding a third for Sports late on but Livesey showed good hands to hold on to his rising drive at the first time of asking but neither side could find a goal to end the game on a high with Sports Tyreece Robinson eventually lifting the trophy at the end of the game.