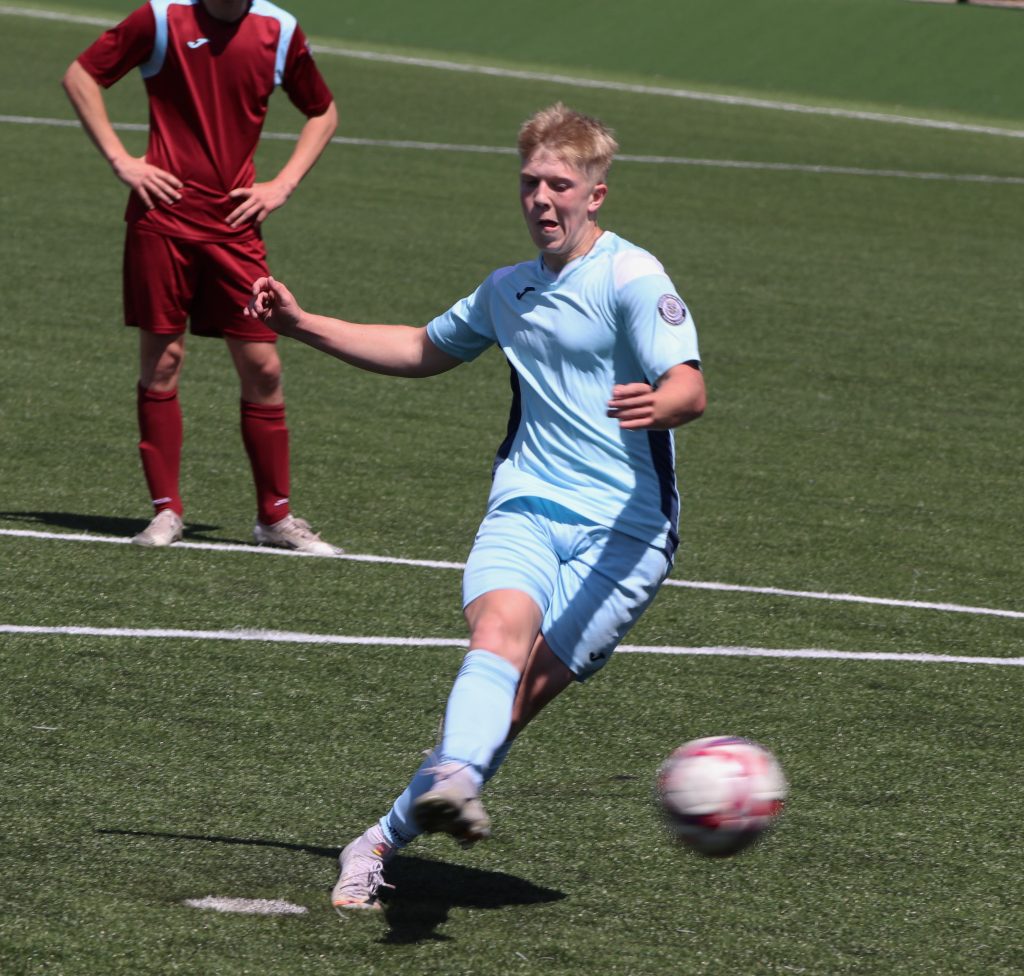 With 16 goals scored and only one conceded during the ESPFA National Academy play-offs, Mickleover Reds Academy can rightfully be proud to call themselves NATIONAL CHAMPIONS.

Having beaten Runcorn Linnets 8-0 at Rushall two weeks ago, only a point was needed against Chesham Utd to add the National title to their Midlands crown.

The kick off was delayed as Chesham were stuck on the motorway, but once the game kicked off there was more one-way traffic.

Jake Edge-Lucas had a shot in the second minute, saved by the Chesham keeper Hosier, but earned the first corner.

A few minutes later Josh Satchwell found Brodie Carter in the box, but his path was blocked.

Chesham still hadn’t made it into the Mickleover half when the first goal came. Bobby Battisson had found Carter on the left, who calmly fired the ball into the top left hand corner after eight minutes, 1-0. 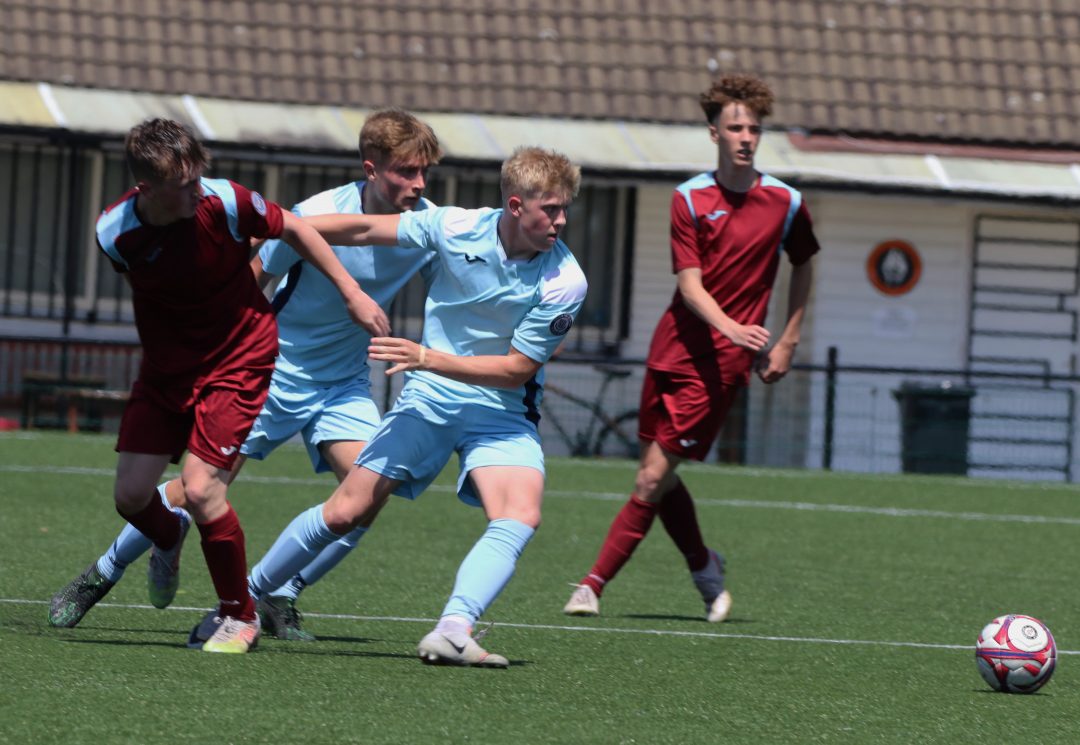 Only two minutes later Battisson tried his luck, firing over the bar from outside the box as the Mickleover pressure continued,

It was 12 minutes in before Chesham had an attack, but their hopes were soon foiled as Tom Smith came off his line to kick clear.

Chesham had a free kick after Will Robinson pulled striker Wilkins shirt to hold him back. The free kick was wasted however, bouncing off the wall.

Mickleover were straight back into attack mode and a charge down the right wing from Edge-Lucas, fired in a low cross to find Fin Barker, 2-0 after 16 minutes.

Chesham started to push forward, but their attacks came to nought, with Cameron Anthony and Robinson solid in the middle of the defence, ably supported by wing backs Edge-Lucas and Ben Lewin.

Barker was through again after 20 minutes, but was blocked just before he was able to shoot. Then Carter was blocked similarly after a good build up with Barker and Ted Stevenson again.

Five minutes later and it was 3-0, when Carter picked the ball up on the edge of the area, saw Hosier only slightly off his line, but chipped a curling ball into his far right hand top corner.

They had barely kicked off again when the menacing Battisson’s trickery once again left the Chesham defence flat footed. He got his shot in but over the bar again. 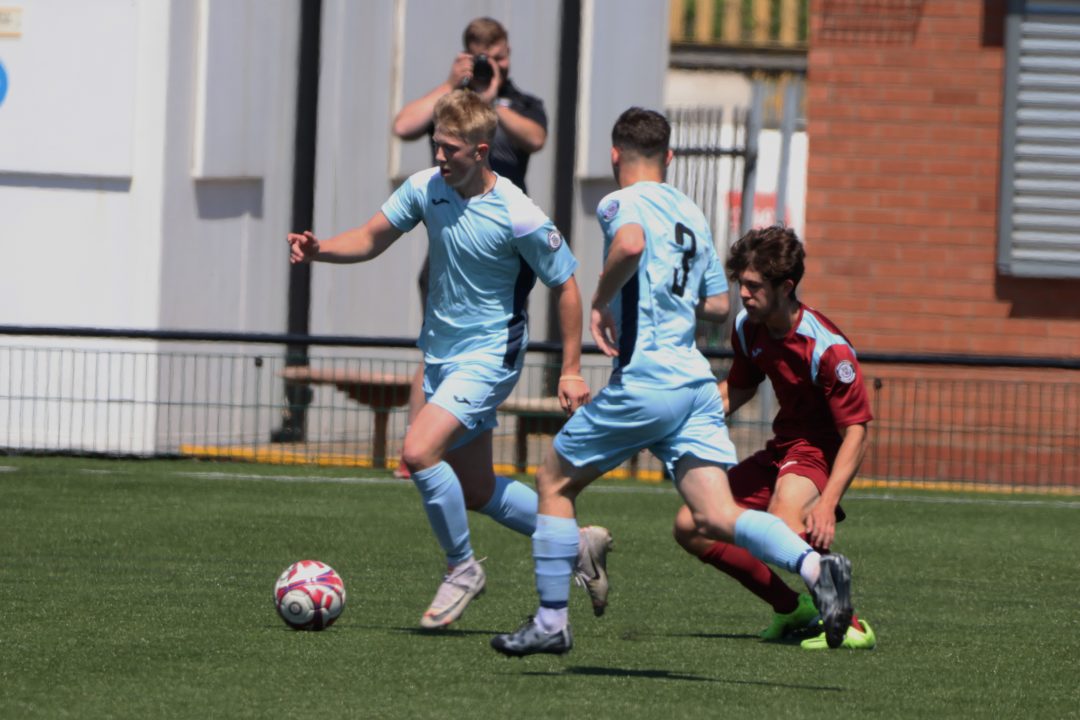 Shots were reigning in on the Chesham goal from all angles and Battisson had another shot cleared off the line in the 27th minute.

Both wing backs were on the attacks regularly, and Edge-Lucas was able to do his own bit of showboating, with a double spin to baffle the Chesham defence, before firing a shot as he cut in from the right.

Robinson then charged half of the length of the field to get a telling cross in from the left, but after a rebound found Carter, his shot was just over.

Hosier had to charge off his line again in the 43rd minute, narrowing the angle as Satchwell attacked, finding Barker whose shot was just over.

But Barker concluded the first half in fine style, with a great jinking solo run. Hosier again came out to try and intercept, but Barker put his shot wide, glancing the post initially, before turning back into the net, 4-0.

The second half had barely kicked off and it was goal number five, with Carter on the end of a great build up between Satchwell, Battisson and Barker, for his hattrick, 5-0.

Three minutes later it was 6-0 after Barker was tripped in the box. He stepped up to fire it home for his hattrick too, after Hosier managed to get a hand to it.

Two more minutes and another good build-up saw Satchwell’s shot just over, before Wilkins was on the attack for Chesham, forcing Smith to make his first save of the game after 54 minutes.

George Atwal had a quiet first half, but was finding more space for himself in the second. He had two shots within a couple of minutes, the second forcing Hosier to tip it over for a corner.

As the corner came in Satchwell collected and his header was cleared off the line, before Edge-Lucas followed up with a fierce effort just over.

Chesham had never lowered their heads despite the mauling they were receiving, but after 58 minutes they had their chance, after Robinson pushed the striker from behind, Wilkins hit the penalty home for 6-1.

Shortly afterwards Barker put a cross into the box, just behind Battisson, Edge-Lucas picked it up and his shot was blocked, before Barker put the rebound over the bar. 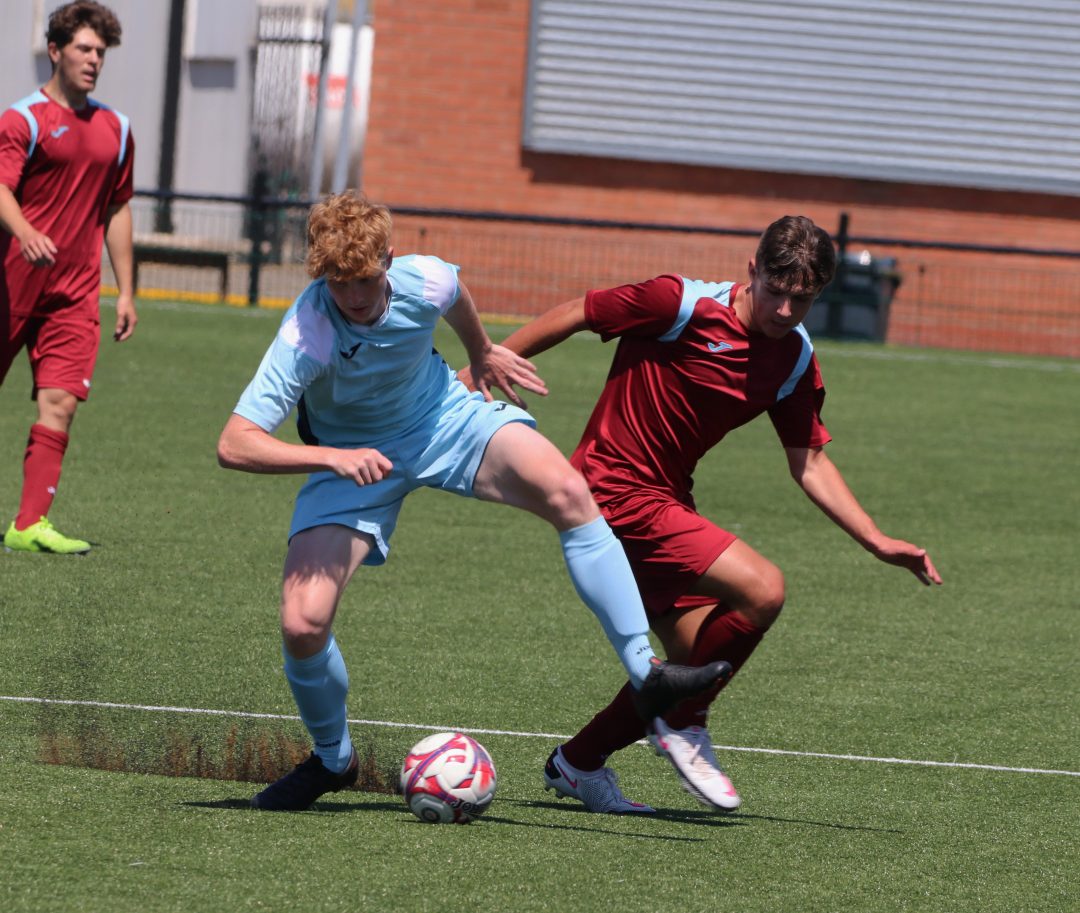 In the 68th minute Battisson cut in from the left after a ball from Stevenson, before Barker’s shot was palmed away by Hosier.

From the resulting corner Carter’s attempt was cleared off the line.

Three minutes later it was finally Battisson’s turn to have the ball in the net, only to have it disallowed for allegedly being offside.

They only had to wait another minute though and it was 7-1. Barker jinked his way through the Chesham defence with perfection and picked his spot for his fourth of the match.

Chesham then had an attack and called Smith into action.

But it was back on attack and Mickleover had another free kick when Battisson was tripped just outside the box. Atwal and Lewin deliberated over the free kick which was fired over the bar.

With 10 minutes left Carter was unlucky not to connect after a cross from Lewin on the left, just before Barker was left in the clear and shot just wide of the post.

Kai Moore was the first sub for Carter and shortly after it was goal number eight. Edge-Lucas and Battisson worked together to create the gap and Atwal made no mistake to make it 8-1.

Barker and Edge-Lucas then made way for Kyran Ward and Jovis Tsoumou, but their was little respite for the Chesham defence.

Reluctantly Hosier was replaced in the Chesham goal after his saves had kept the score down, but Chesham were still pushing hard and earned an 84th minute corner.

The clearance however found Moore, who had his shot cleared off the line, before Chesham had a late chance which was wasted by poor finishing.

With two minutes to go Ward was within inches of making it nine, when he slotted the ball past the advancing keeper, only to be six inches wide of the far post.

Ward combined again with Moore as the whistle was poised, firing just over, before the celebrations started and Mickleover were crowned NATIONAL CHAMPIONS.

It was tremendous, they have been a fantastic group to work with, hardworking and humble, they listened and learned. This was the final product and I am proud of them.