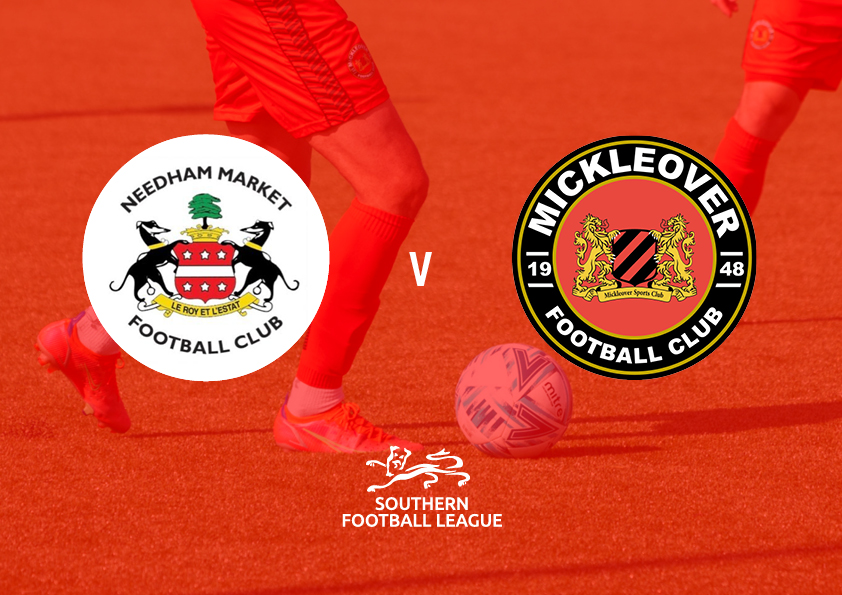 It’s off to East Anglia again this weekend, when we visit Bloomfields, the home of Needham Market FC.

Mickleover will be looking for their fourth consecutive win to continue the climb up the table. Elliott Reeves is still unavailable following his red card, but otherwise gaffer John McGrath should have a full squad to choose from.

Currently 12th in the Southern Premier League Central Division, one point behind Mickleover, our hosts have played five of their seven league games at home.

After a 0-0 draw at Rushden & Diamonds on the opening day of the season, they had their first defeat at home to Bromsgrove, before wins against St Ives and Stourbridge.

After a 2-0 defeat to Rushall, they played their second away game at Hitchin, losing 0-1, but hit five without reply against Royston at home in their last match.

They are still in the FA Cup too, having knocked out Leiston and Sheringham at home and are at home again in the next round to Brightlingsea.

Former Northern Ireland International midfielder Kevin Horlock has been in charge for two years, having stepped up from a coaching role. He previously managed Chatham, Colchester Under 21’s and the Northern Ireland Under 21’s, having finished his playing career at Needham. He also played for West Ham, Swindon, Manchester City, Ipswich, Doncaster, and Scunthorpe.

Nathan Munson and Tom Rothery are both assistant managers. Former goalkeeper Munson has been at Needham for nine years in various roles, having played league football for Colchester, while Rothery came back to the club in 2019 from Brightlingsea.

First choice keeper Marcus Garnham is in his fourth season at Bloomfields, having signed from Leiston, but his whole career has been spent in East Anglia, having played for Leiston, AFC Sudbury, Lowestoft and Bury Town.

His deputy Finley Shorten is a product of their own Academy and is looking to get his break having been on the bench so far this season.

Right back Kyle Hammond came from Leiston in July last year, after starting out as an Ipswich Town Junior, during which time he was loaned to Maldon & Tiptree.

Dan and Keiran Morphew are twins and both play at centre back. Dan was at Haverhill Rovers and Thetford Town, before joining our hosts from Dereham in 2018. Keiran was the first graduate from their own Academy and made the first of his 250 plus appearances in 2013.

Christian Frimpong is another centre back. He joined Bristol City Academy from Chippenham Town, before moving on to Reading and Swindon. Following his release he played for Braintree, Lewes, Sudbury, and Chelmsford City, from where he joined Needham in August.

Teenager Hugh Cullum is another defender to come from the clubs Academy, he debuted last season and has had two starts this year and is an England Under 18 Schoolboy International.

Right back Jake Dye has come through the home Academy too. He debuted back in 2015 and expects to make his 200th appearance for the club this season.

Winger Jacob Lay was a summer signing from Ipswich Wanderers in the Eastern Counties League, having scored 13 goals for them last season as they won the Division One title. He started out at Ipswich Town and has played for Brantham Athletic, Sudbury Town, Braintree, Whitton Utd, Felixstowe & Walton and Dereham, as well as a short spell at Preston North End.

Jamie McGrath is another summer signing too. He was on a dual registration last year with Brantham Athletic and East Bergholt, with a reputation as a prolific scorer, with 56 goals in 34 games last season. He scored his first for Needham in the home win against St Ives.

Midfielder Patrick Brothers came from Leiston in February, after 12 years at their Suffolk neighbours. He was previously at Brantham Athletic and is Needham’s top scorer this season with three goals.

Left winger Ross Crane came from Ipswich Town in August, where he was part of their Under 21’s. He started out at Colchester and Sudbury before joining Ipswich in July 2020 and was also loaned to Concord Rangers and Bury Town.

Midfielder Evan Collard is a former Needham Market player currently on loan from Stowmarket. He played Academy football at both Ipswich Town and Needham and has also played for Witham Town, before joining Stowmarket in September 2020.

Evan isn’t the only Collard in the squad, as brother Noah is another to come from the club’s own youth scheme. Another midfielder who has worked his way into the first team squad over the last couple of seasons.

Seth Chambers made his first team debut in February having come through the clubs Academy. In his first full season he has already scored two goals in the win over Stourbridge.

Midfielders Tom Fitzgerald and George Exworth are yet to make a start this season, having worked their way through the Academy and reserve teams.

Taylor Clark is another young midfielder who was on trial with Aston Villa at the beginning of the year, before returning to our hosts Academy.

Finally, Ryan Viggars, a striker on loan from Charlton Athletic. He was previously at Sheffield Utd and is a Wales Under 17,18 & 19 International.