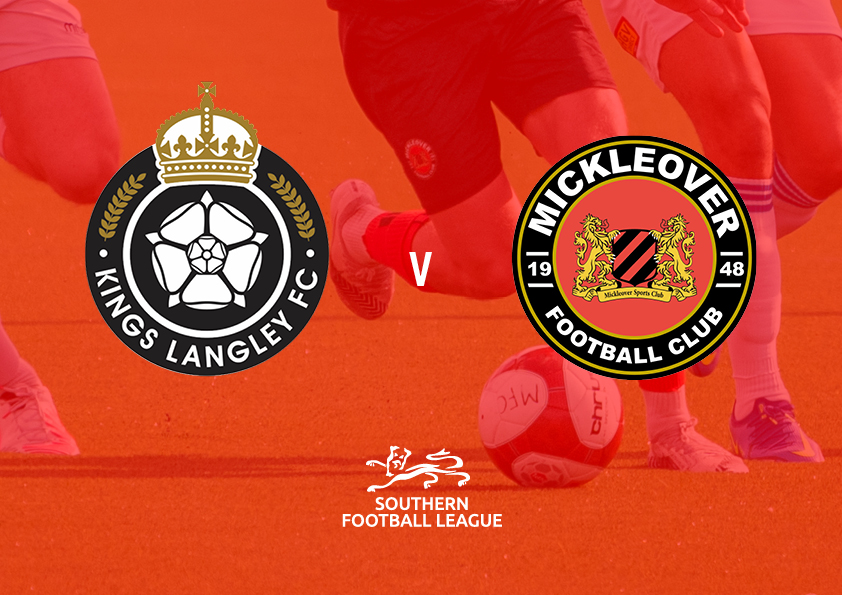 This weekend is the start of a new era for Mickleover FC, when they travel to Hertfordshire to face Kings Langley in their first game in the Southern Premier League Central Division.

Chris Cummins side are also new to the league as they just escaped relegation in the South Division and have also been transferred for 2022/23.

Our visitors have had a busy pre-season which concluded with a 2-0 home win against Watford Academy ON Tuesday night.

Manager Cummins had mainly worked in Youth football with Watford, Luton and Reading before taking over at Kings Langley in 2019. He has also coached at Toronto FC in Canada.

Centre back Jorell Johnson is our hosts longest serving player, having arrived from Watford in July 2016. During his time with the Hornets he was also loaned to Hemel and St Albans.

Midfielder Cain Keller was one of the scorers in the home win against Watford on Tuesday night, he has also played for Biggleswade, Hendon, Barnet and Stevenage.

Goalkeeper Hafed Al-Droubi is a recent signing from Potters Bar. He started in Luton’s Academy before going to Turkey with Besiktas. He has also played for Manchester 62 in Gibraltar, Chesham, Harrow, Beaconsfield and Northwood.

Midfielder James Jellis arrived from Aylesbury last October. He is a former Stevenage junior and has also played for Hitchin and Wingate.

Alex Lafleur was another signing made last October, when he came in from Beaconsfield. A versatile defender he started out at Wealdstone and has played at Chalfont St Peter, Gosport, Moneyfields and Salisbury.

Ryan Case is a centre back or midfielder who was signed from Hartley Wintney in March. A well-travelled and experienced defender his career started as a Bournemouth Junior before joining Havant and Dorchester continuing via Braintree, Basingstoke, Staines, Poole, Eastbourne, Bath, Gosport, Oxford City, Dulwich Hamlet and Chippenham.

Striker Bradley Wadkins was part of last years team, having arrived from Chesham in July ’21. He previously was at Enfield and Slough and was the other scorer against Watford.

James Mulley is another recent signing. The winger or midfielder was with Ware last season, having started his 15 year footballing career at Yeading.

Among his other teams have been Hayes and Yeading Utd, Maidenhead, Slough, Chelmsford, AFC Wimbledon, Enfield, Bracknell and Uxbridge.

Young striker Edu Toiny-Pendred had come through the clubs own youth scheme. He made his debut in 2018 before moving to Berkhamsted. After a spell in US College football he played for Watford Under 23’s and St Albans, before returning to Kings Langley.

Former Arsenal schoolboy defender Samuel Okoye-Aheneku had a spell at Stevenage and Wingate & Finchley, before joining Hitchin. He started last season at Sittingbourne.

Josh Boorn is a new arrival from Chalfont St Peter, the attacking midfielder was previously with Luton Town.

Striker Alie Bangura hit two goals in five appearances towards the end of last season, after signing from Berkhamsted. He was previously at Biggleswade, Tring, St Margaretbury, Enfield and Broxbourne.

Turkish born midfielder Aryan Tajbakhsh arrived in February from Potters Bar. He has played for numerous southern based teams as well as spells in Turkey.

Noyan Tajbakhsh is the clubs most recent signing. A striker who was a junior with top Turkish side Fernerbahce, but has dropped in and out of the game in recent years. He has also played in the UK for Woodford and Uxbridge.

Centre back James Kaloczi is another new arrival from Hemel, he has previously had a couple of years at St Albans, where he was also loaned out to Wingate.

It’s a grass pitch and kick off is at 3pm