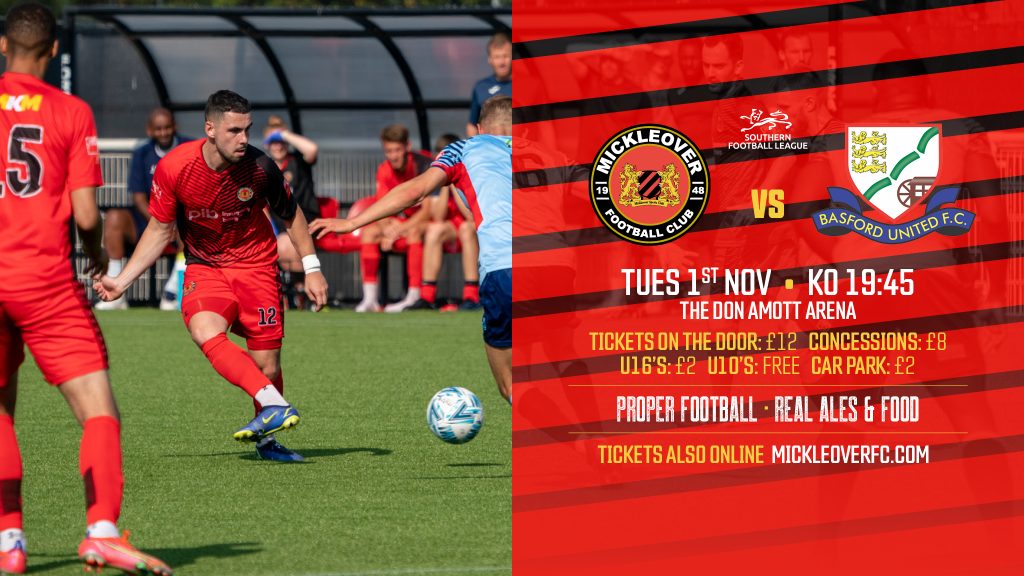 With local rivals Basford Utd the visitors, Mickleover host the second of a run of four home games with more Tuesday night action at the Don Amott Arena.

With no game last Saturday, Sports have slipped one place to seventh, with Basford currently two points behind in ninth.

Our visitors went out of the FA Trophy last Saturday to Marine, but have only managed to win one game away from home, 1-0 at Coalville

After away defeats at Redditch and St Ives, Mark Clifford’s side will be looking to return to winning ways too, after their last victory at home to Hednesford 1-0 on October 11th. But Mickleover will trying to make it four wins in a row.

Goalkeeper Kieran Preston is a former Scotland Under 19 International, whose been at Basford since December 2019. He played his junior football at Nottingham Forest and Bristol Rovers.

Second choice keeper Gianni Musson was in goal for Basford when they Mickleover in the FA Youth Cup in a penalty shootout, having previously been at Derby County, Nottingham Forest and Notts County.

Brad McGowan is a centre back signed from Peterborough Sports in July. He started out at Notts County, before joining Grantham on his release. He then joined Alfreton and was loaned out to Boston Utd before his stay became permanent. He then moved on to Frickley and back to Boston, before a two-year stay at Peterborough.

Josh Barnes was another new arrival pre-season. A former Nottingham Forest junior, the young defensive midfielder had two loans at Truro City, before coming to Basford following his release from Forest.

Right back Dom Roma has sometimes captained the side. He has a long and well-travelled career that started at Sheffield Utd. Loans at Boston and Tamworth were followed by a move to Hinckley Utd, moving on to Alfreton, Harrogate, Gainsborough and Scarborough.

He first came to Basford in July 2017, but after almost two years he returned to Scarborough, only to return to Basford only four months later.

Midfielder Adam Chapman was another pre-season signing. A former Northern Ireland Under 19 and 21 International, he started off at Sheffield Utd. Having moved onto Oxford Utd, loans at Newport and Mansfield followed, before a permanent move to Newport, before returning to Mansfield. He made over 150 League Two appearances, before going non-league with Gainsborough, Boston Utd, Sheffield, Handsworth and Grantham. Then he had nine months at Ilkeston before signing for Basford.

Ben Starkie is a central midfielder and capped by Tanzania at full, under 17 and under 20 levels. He started at Rugby Town before going to Germany with Wilhelmshaven. On returning to the UK he joined Shepshed Dynamo, and had eight months at Spalding Utd before joining Basford in the summer.

Midfielder Matt Thornhill has captained the side for most of this season. Another former Forest Junior, he was loaned to Brighton and Cheltenham, before joining Hibernian in December 2012.

With 80 league games under his belt, he then joined Buxton, moving on to Shaw Lane and Gainsborough, from where he came to Basford in March 2017.

Striker Anthony Dwyer was another summer signing. He was a Mansfield Town Junior and has been regularly on the move. Stafford, Matlock, Telford, Hednesford, Altrincham, Leamington, Barwell, Tamworth, Glebe, Stourbridge and Alvechurch, before spending nine months at Nuneaton prior to his Basford signing.

Fellow striker Gregg Smith is well-travelled too, since starting off at Corby. Much of his career has been spent in Lincolnshire with Grantham, Stamford, Gainsborough and Boston Utd, with brief stops at Kings Lynn and Tamworth. He arrived in the summer too after his second spell at Spalding.

Centre back Declan Dunn has been at Basford for just over two years since his release from Notts County, while Zimbabwean striker Lither Munakandafa is currently on loan from Notts.

Lewis Carr is another central defender, who came from Grantham in 2016. He played for Stamford and Quorn too, after a spell at Cambridge Utd.

Midfield or wing suits Harvey Grice, another former Forest youngster who joined Alfreton on his release. He had a months loan at Basford back in February, before making it permanent in July.

Seth Patrick is a new signing, a central midfielder who played junior football with Northampton Town and in Germany with Schwanheim and Vfb Lubeck . He joined St Ives on his return to the UK before a spell in Scotland with Brechin City.

Defender Stern Irvine was another Notts County Junior. He came do Basford in May after spending last season at Ilkeston.

Yet another ex Notts Junior is Owen Betts, who arrived in 2020 after loans at Dover Athletic and Worksop.

Riece Bertram was another summer arrival from Belper Town. He was at Basford in 2016 too, but has also played for Carlton, Matlock and Ilkeston.

Striker Tyreece Palmer came on loan from Notts County in January, but he has now made his stay permanent for this season and also had spell at Melton Town.

Midfielder Courey Grantham has been with the club for seven years, since coming from Heanor Town. He has also played for Ilkeston and was loaned to Hednesford last season.

Ollie Clark is another midfielder, signed from Carlton in January 2021, but has been out of action for much of his time with the club due to injury.

Defender Jordan Haywood has come through the Academies at both Scunthorpe and Mansfield before joining Basford, but has also been loaned to Newark and Eastwood Community. Nathaniel Peters was also at Mansfield and both played a major part in our visitors FA Youth Cup run.

Striker Wayde Hines was a Forest Junior, who arrived at Basford last season. He also had a loan spell at Grantham.

Mitchell Tait is a young left back signed from Ilkeston last December.

The game kicks off at 7.45 pm, the bar will be open, food on site and your attendance would be more than welcome.