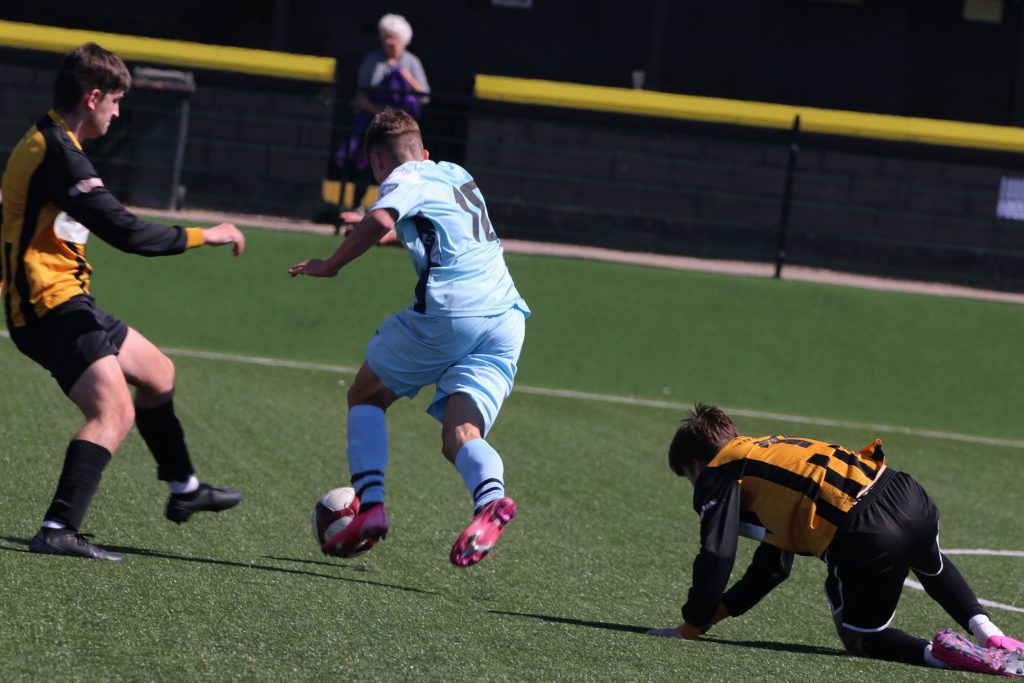 From the first whistle Mickleover were on the attack, with Ben Lewin getting the first shot on goal after five minutes.

Only two minutes later the Rushall goal was threatened again when a Josh Satchwell cross, whistled just past the post from a Brodie Carter header.

Rushall managed to make a break and put a good ball across the face of the Mickleover goal, but with no one to collect it rolled out for goal kick. 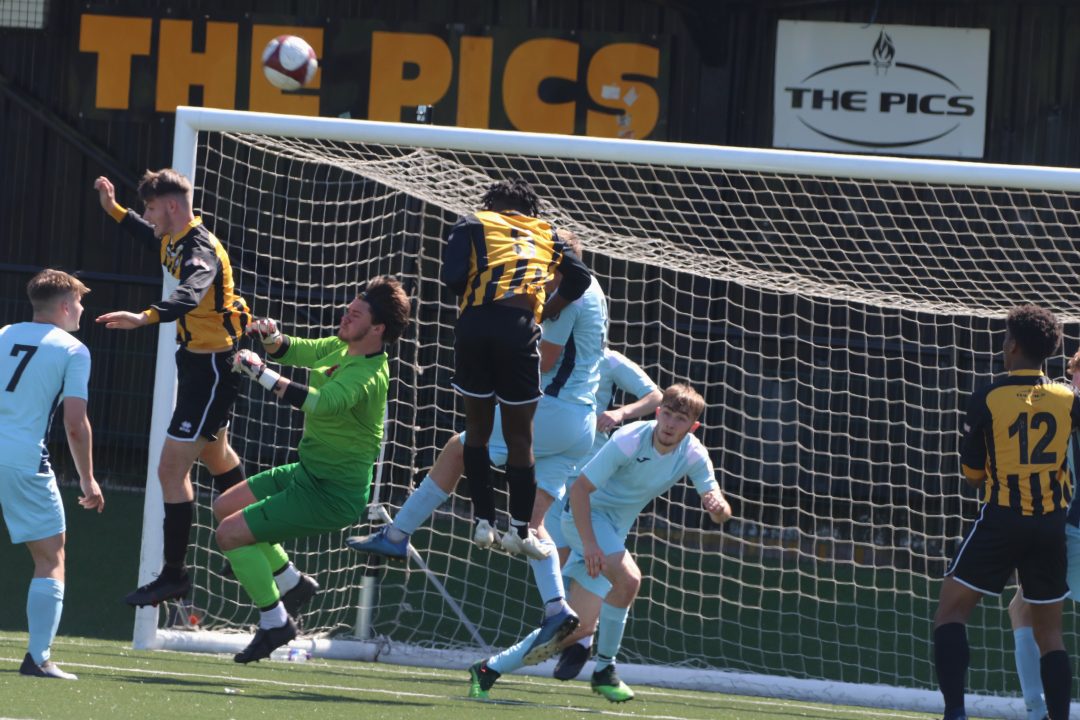 The dominance from the Mickleover attacks meant that wing backs Satchwell and Lewin spent more time in attack than defence, creating chances from where Barker had another shot just wide.

In the first 20 minutes both Barker and Carter kept the pressure on, and an appeal for a penalty failed to succeed after Barker had gone down in the area.

George Atwal, Jacob Edge-Lucas, Bobby Battisson and Louis Pennington had control of midfield and after Battisson fired a shot at the keeper, the following corner was met by Cameron Anthony’s head and it was finally 1-0.

The attacks continued to flow and after Smith easily collected a Rushall free kick, Barker had a good shot after 25 minutes, before Satchwell hit the bar with a header.

But on the half hour Edge-Lucas was on another run, when he was tripped on the edge of the box. Lewin took the kick, picked his spot and fired into the left hand corner, 2-0.

Four minutes later Edge-Lucas had a shot pushed out for a corner, quickly followed by a saved shot from Battisson, before Barker hit the bar again! 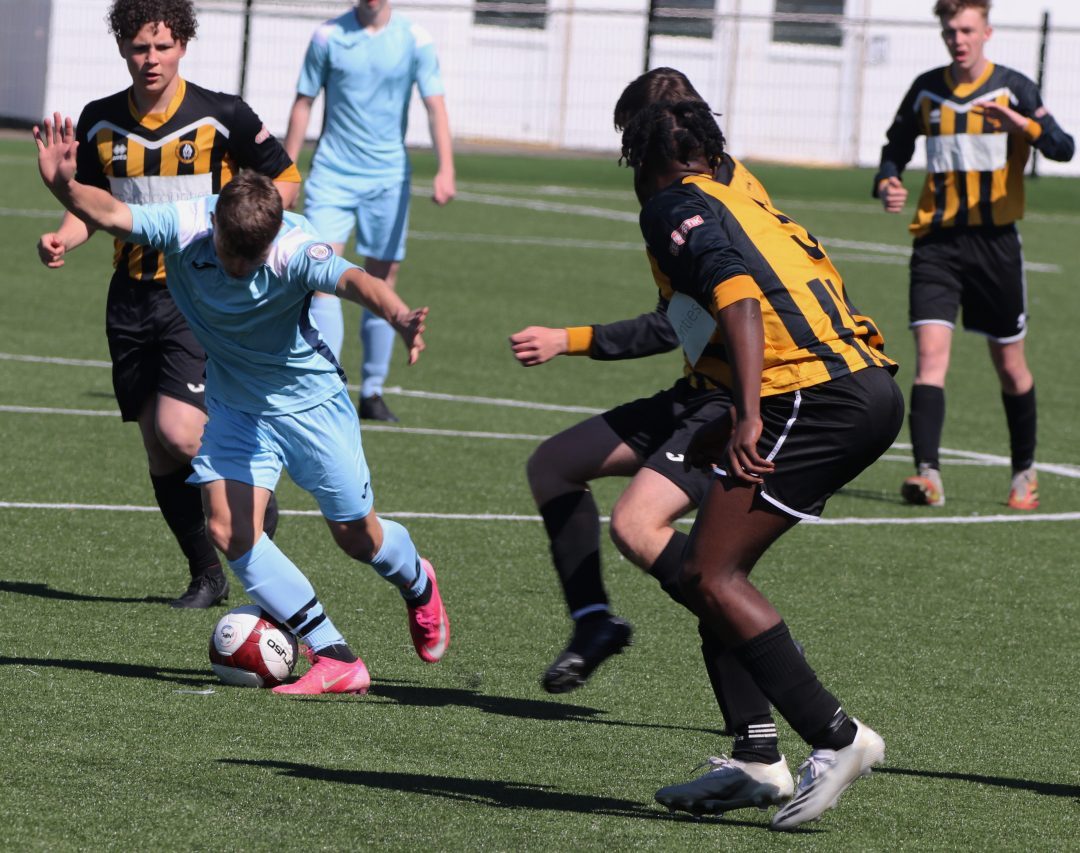 There was another telling run from Battisson, which just failed to reach Carter and similarly as the half time whistle was readied, Carter’s diving header just missed a Satchwell cross.

As the second half kicked off, a Rushall free kick came to nought, before Carter sprinted after a long clearance, which proved to be just out of reach.

Lewin then had a shot over after 49 mins, as Carter and Barker continued pounding the Rushall backline.

Only a minute later though, Barker got another shot in to make it 3-0, although Battisson put it in again to make sure, onlookers confirmed it was Barker’s goal.

Suddenly the attacking stopped and Rushall began to threaten. After one shot had cleared the bar, on the 10 minute mark they pulled one back 3-1, with the Mickleover defence split wide open down the middle.

There was yet another strike against the bar in the 56th minute when Battisson created his own space, before he set up a shot for Atwal, who shot just wide.

Anthony and Will Robinson continued to look uncomfortable for a while, and after a mistake from Robinson, he had to fight back rapidly to rectify.

In the 62nd minute there were more defensive errors, a yawning gap down the middle offered Smith no protection in the Mickleover goal and suddenly it was 3-2. 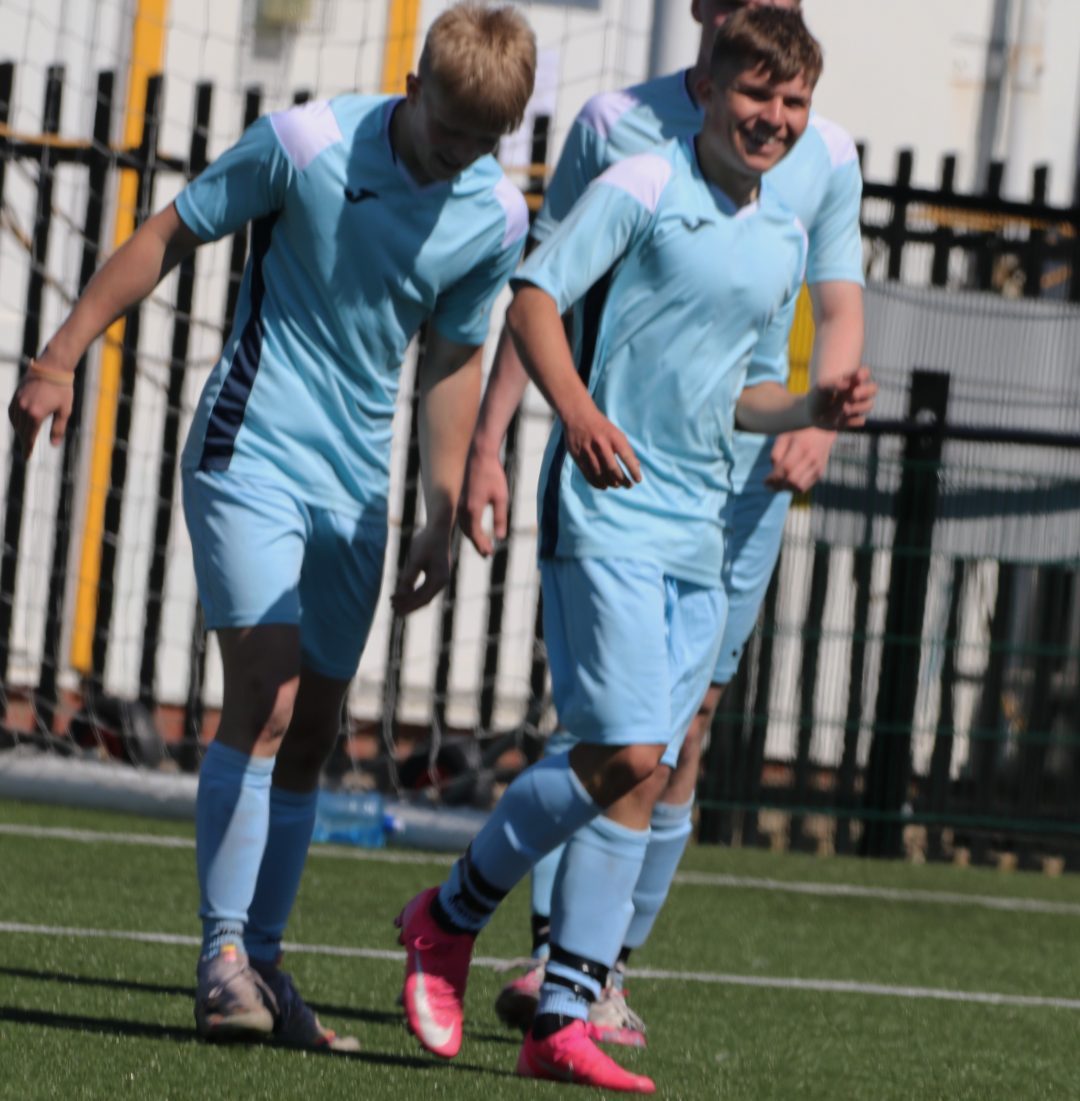 The first substitution was Ted Stevenson on for Atwal, followed quickly by Mickleover’s fourth goal. Barker had his initial effort saved after 21 minutes, but was there for the rebound 4-2.

Seven minutes later Barker completed his hattrick with a fine, strong solo run for 5-2, before both he and Carter took a well earned rest as Kai Moore and Sam Pipes came on.

Moore had a good shot saved and after Battisson was put through he shot wide. With seven minutes on the clock Moore was inches away from collecting a Satchwell cross and in the final minute Moore went one on one with the Rushall keeper, but the final score remained 5-2.